This article is over 9 years, 7 months old
More than 2,000 engineering and supervision workers struck on Monday of this week against plans to introduce a two-tier workforce at Ford car factories.
By Dave Sewell
Downloading PDF. Please wait...
Tuesday 19 June 2012

More than 2,000 engineering and supervision workers struck on Monday of this week against plans to introduce a two-tier workforce at Ford car factories.

The strikers are members of the Unite and GMB unions.

Ford wants to close the pension scheme to new starters and put them on a new rate of pay.

“Our fears are for the future,” said Geoff Bores, a Unite rep for engineers at Ford Dagenham.

“We’re just trying to defend our terms and conditions.”

Geoff has worked for Ford for 40 years. He and many of his colleagues are approaching retirement age.

They point to other firms where schemes have first been closed to new starters and then abolished altogether.

Mark, one of the two dozen Unite members picketing at Bridgend in South Wales, said, “We have seen this before.

“Companies say they ‘have no plans’ to alter the existing scheme but they don’t give any guarantee for the future.”

Young workers are worried too. “I want there to still be a pension when I retire,” said Yatin Mistry, a 30 year old IT worker at Ford Dagenham.

At the stamping facility in Dagenham, workers told Socialist Worker that no one had crossed the picket line.

“Pensions is the one issue that can unite everyone,” said one GMB picket.

“It seems like the whole country is in a race to the bottom on pensions.No one wants to retire under the poverty line.”

Workers also oppose the idea of working alongside people who do the same work for less money.

There is a history of struggles for equal pay at Dagenham. Women workers famously struck there in 1968 for the same wages as men.

“This is something that will drive down pay overall in the long term,” said Kevin Matthews, a Unite rep in Basildon, Essex.

“For many of us this is the first time we’ve done this—and we won’t back down.”

Workers at all sites were frustrated at the company’s unwillingness to talk since it made its plans clear last November.

Ford is attacking its workers despite making a global profit of almost £900 million in the first quarter of this year.

GMB members backed strikes by 71 percent. Some 67 percent of Unite union members voted for strikes on a 100 percent turnout.

“People are very determined to fight back and carry on until we’ve won. We can’t even trust Ford to keep the place open, so we have to stay strong as a union.”

Thanks to Jeffrey Hurford, Kate Hurford and Stu Curlett

Third one-day strike at JJB - and protests this Saturday 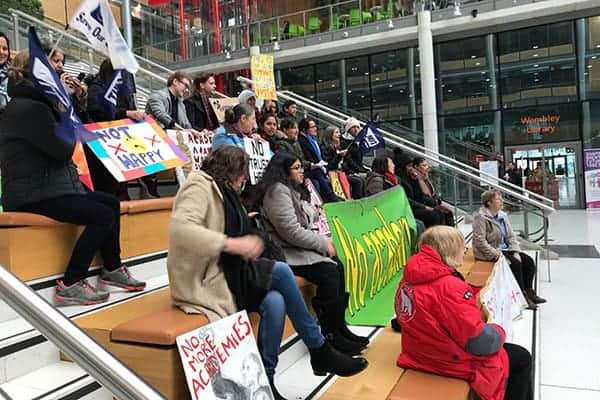