This article is over 14 years, 6 months old
Demand for increased state pensions Delegates voted overwhelmingly for the union to push for an immediate and substantial increase in the basic state pension to £138 a week.
Downloading PDF. Please wait...
Tuesday 26 June 2007

Delegates voted overwhelmingly for the union to push for an immediate and substantial increase in the basic state pension to £138 a week.

In the debate on Europe, Wendy Allison of Manchester local government branch, said, “If we are not vigilant about the European Union it won’t matter whether the next government is Tory or New Labour or old Labour,” she said.

“We will have cheap labour, deregulation, and marketisation imposed by Brussels and supported by the European court,” she added.

Jim, a delegate from Doncaster, said, “The experience of workers fighting over the European services directive, or against attacks on young people in France, or the strike in support of migrant workers at Irish Ferries all show that public sector workers can take a stand against neoliberalism.”

Unison is stepping up legal action against employers who won’t pay women their worth. “We will not hold back if they will not cooperate,” said general secretary Dave Prentis, introducing a special briefing on equal pay.

“Whatever employers may say, not having the money to pay is no defence in law.” Unison has around 40,000 equal pay claims pending.

“Workers must not be allowed to believe that it is no-win, no-fee lawyers who are the true champions of equal pay,” said Prentis.

Unison has called a national lobby of parliament for 10 July to demand full funding for local government to pay single status deals.

The Unison conference unanimously passed a motion calling for action against the Nazi BNP, after a passionate debate.

Erica Petgrave of West Midlands branch warned that, with 50 councillors in England, “the BNP has the potential to be Britain’s fourth political party.

“The rise of the BNP is accompanied by an increase in Islamophobia. I stand here as a socialist and a Muslim women with mixed race children.

“I’m everything the BNP despises, but I won’t allow my faith to be put under threat from Nazis,” she said.

The conference agreed to back Love Music Hate Racism as well as reaffirming its support for Unite Against Fascism as part of its commitment to tackling the BNP.

John McLoughlin, from Tower Hamlets local government branch, said, “To those who say the BNP should have freedom of speech, I ask what freedom would they give to our black members or our LGBT members?

“Let’s keep Nazis out of our unions.” 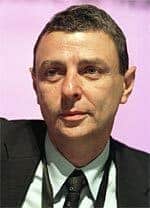