This article is over 13 years, 7 months old
Frustration and anger with the government ran through the national delegate conference of the public sector workers’ Unison union in Bournemouth last week.
By Simon Basketter
Downloading PDF. Please wait...
Tuesday 24 June 2008

Frustration and anger with the government ran through the national delegate conference of the public sector workers’ Unison union in Bournemouth last week.

Feelings were heightened by a Unison-commissioned poll that showed Labour’s traditional supporters are deserting the party in large numbers.

Some 47 percent of those who have regularly voted Labour at past elections now say they are less likely to vote for the party than they were in 2005.

The collapse in support among public sector workers is worse, with 49 percent saying they are now less likely to vote Labour.

Unison’s general secretary, Dave Prentis, said, “It’s clear that the Tories are closing in on Labour’s natural territory. Gordon Brown must wake up and smell the coffee. Heed this warning shot – it’s time to end the affair with big business and recapture traditional ground.

“Public sector workers – Labour’s natural supporters – are deserting the party in their droves. Without their votes, Labour will lose the next election.”

Prentis went on to say the union would oppose attempts to impose an “unfair and immoral” pay policy on public sector workers.

He said, “This pay policy is built on a lie – a myth peddled by the treasury that public sector workers’ pay causes inflation.”

He added that the unions did not help to elect a Labour government in order to then watch its core supporters “suffer”.

Prentis said, “Our members don’t want Gordon Brown to feel their pain – they want him to stand up and heal their pain, to give them fair pay increases.

“If this government continues to insult six million public service workers it will pay the ultimate price.

“It’s time for our government to raise our people up, or our people will bring Gordon down.”

Questioning of the government’s policies continued in several debates, including one that sought to celebrate ten years of the national minimum wage.

Jo Cardwell, from Walthamstow Unison, received loud applause as she spoke about her work in a youth offending team and attacked the age discrimination built into the minimum wage.

Rather than restricting the minimum wage “the government should bring in a maximum wage to stop the grotesque bonuses in the City,” she said.

Pressure from delegates meant that a motion titled “New Labour: what do we get for our money?” was discussed, despite attempts to keep it off the order paper.

The motion was moved by Glenn Kelly, from Bromley Unison.

He said, “After 11 years of a Labour government there is not one motion on our conference agenda that has praised the government. ”

“People are abandoning Labour because Labour have abandoned them. We can say that New Labour isn’t listening but we have 1.3 million members.

“The way we use our influence needs to be challenged.”

Having lost the battle to keep the motion off the agenda, Unison’s leaders tabled a wrecking amendment that aimed to delete the most contentious points from it.

And, although their speeches argued against a review of the union’s political funding arrangements, their amendment conceded the need for one.

In his speech for this amendment, Unison’s deputy general secretary Keith Sonnett suggested that the movers of the motion wanted only to “get their grubby hands on our members’ money”. 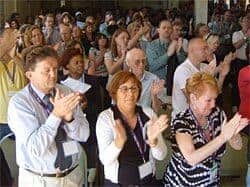