This article is over 18 years, 9 months old
BALLOT PAPERS will start going out next week for elections to the national executive of Britain's biggest union, Unison. The union has members in local councils, the health service, schools, higher and further education, as well as in areas like the gas, water and electricity industries.
Downloading PDF. Please wait...
Saturday 05 April 2003

BALLOT PAPERS will start going out next week for elections to the national executive of Britain’s biggest union, Unison. The union has members in local councils, the health service, schools, higher and further education, as well as in areas like the gas, water and electricity industries.

The vote takes place against the background of political turmoil over the war and domestic issues from privatisation to pay and the union’s links with Labour. Voting closes on 20 May. The United Left organisation is putting up a broad list of candidates which deserves active backing and support across the union. The bigger the vote for them the more it will strengthen the resistance on every front.

Jon Rogers is Unison branch secretary in Lambeth, south London. He is standing for the United Left for a seat on the executive. ‘I want to part of a national executive which fights hard for Unison members,’ he says. ‘As a Labour Party member and a socialist I know that we can’t rely on New Labour. We need a stronger Unison to fight for our rights.’

Mandy Berger from Camden, north London, is also a United Left candidate for the executive. She says, ‘My members are sick of a New Labour government that privatises more than the Tories, bullies the firefighters and would rather bankroll war than invest in public services. We need a national leadership that will tell Labour that the days of a blank cheque from our union are over.’ 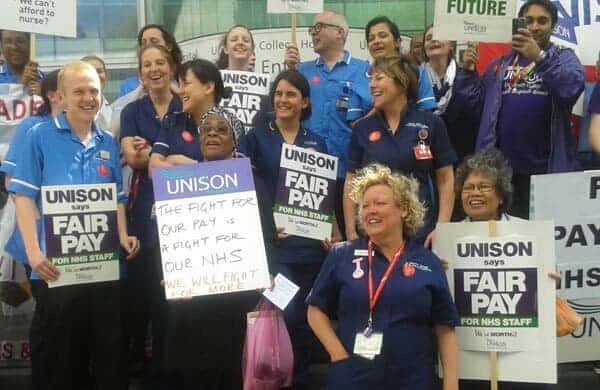