This article is over 16 years, 7 months old
Anti-fascist activists are out to stop the British National Party (BNP) at a council by-election in Barking and Dagenham, east London, on 23 June.
Downloading PDF. Please wait...
Saturday 11 June 2005

Anti-fascist activists are out to stop the British National Party (BNP) at a council by-election in Barking and Dagenham, east London, on 23 June.

The poll is taking place in the Goresbrook ward of Dagenham, which was won by the fascist BNP in a council by-election last September.

The BNP councillor, Daniel Kelley, recently resigned, triggering the by-election. He was the first BNP councillor in London since 1993.

Unite Against Fascism has called a day of action against the BNP in Goresbrook this Saturday. “This is a chance for all those opposed to the fascist BNP to ensure they do not win back this seat,” says Donna Guthrie from Unite.

“We want to make the leafleting as vibrant and exciting as possible, to encourage people locally to stand up against the BNP.”

The BNP has been targeting the Barking and Dagenham area recently, she adds. They polled 17 percent in Barking during the recent general election, their highest national vote.

“It will be a big dent to the BNP if they can be defeated in this area,” says Donna. “It will be a crushing blow for them. They’re really working the area hard — but there’s more of us than there are of them.”

Unite has been building links with community groups and organisations in Barking and Dagenham opposed to the fascists, she adds. “I’ve been speaking to trade unions, parents meetings, the Barking mosque and the African Welfare Association. We’re building a real united campaign.”

The local Unite Against Fascism group managed to organise a cross section of society into a vigorous, lively celebration of multiculturalism.

Young black people were joined by white trade unionists and anti-Nazis from nearby towns including Cambridge, Daventry and Kettering.

Perhaps deterred by our protest the National Front did not turn up. Once their agreed time of marching had passed, the local police announced that their march would now be banned. 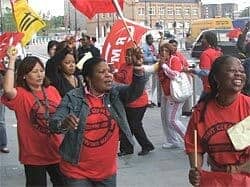