Unite against Islamophobia in Glasgow: ‘the government is terrified of our unity’

This article is over 15 years, 2 months old
Around 300 people rallied in Glasgow’s George Square last Saturday to unite against Islamophobia and protest at the wave of racist attacks on Muslims since Jack Straw’s comments about the veil earlier this month.
By Kev Kiernan
Downloading PDF. Please wait...
Saturday 28 October 2006

Around 300 people rallied in Glasgow’s George Square last Saturday to unite against Islamophobia and protest at the wave of racist attacks on Muslims since Jack Straw’s comments about the veil earlier this month.

Glasgow Stop the War Coalition and the Muslim Association of Britain organised the protest at short notice following a brutal assault on an imam at a Glasgow mosque. The rally was supported by Solidarity, the new left coalition in Scotland, and the Glasgow Palestine Human Rights Campaign.

It attracted a broad turnout, including many young Muslim women and families. Syma Ismail and her friend Nailah Din are students at Dundee University who had travelled down for the protest.

“We’re standing against Islamophobia,” said Nailah. “Jack Straw started this. We’re supposed to have freedom of speech and freedom of expression. If Muslim women want to wear the veil, why shouldn’t they be allowed to?”

Many non-Muslims were also at the rally to show solidarity. “The issue is racism,” said Barrie Levine from Scottish Jews for a Just Peace. “It is important that Muslims and non-Muslims stand shoulder to shoulder against Islamophobia.”

Lorraine Barrie from Glasgow said she was “shocked at the media coverage of Muslims in the past few weeks” and at the attack on local imam Mohammed Shamsuddin.

“This shows the effects of comments by politicians like Jack Straw – they legitimise violence,” she added. “We are uniting together against racism.”

Shazia Ali and her friend Khadijah Ibrahim from the Southside of Glasgow were angry with Tony Blair. “Blair’s making scapegoats for his war in Iraq,” said Shazia.

Denise McLaughlan from Gourock also linked the wave of Islamophobia to the war. “Through the Stop the War movement I have met lots of Muslims that I didn’t know before,” she said. “I think the government is terrified of the unity we have forged – so now Straw and the others go and put the boot in.”

There was also the question of standing up against oppression, she added. “I am a lesbian so I know what it is like to be part of a minority group and to face harassment. Our Muslim brothers and sisters are under attack so I came to the rally to show my solidarity. Who does Jack Straw think he is, telling women what to wear?”

Akhtar Khan, a Glasgow University student, said the comments from MPs had “affected our community directly”, noting the attack on the imam and an earlier firebombing of an Islamic centre in Falkirk. “If we don’t act now, it will get worse,” he said.

Sid Khan also thought that the racism was no coincidence. He points out that “the government has made a conscious decision to move to the right. It’s no accident they say these things.

“They’ve provided another ‘issue’ they need Muslims to focus on. But what they’re doing is taking away the focus from Iraq, Palestine, and Afghanistan.

Among the speakers on the platform was Reverend John Mann, a Church of Scotland minister, Mary Senior from the Scottish TUC and Charlotte Ahmed, representing Solidarity.

Osama Saeed of the Muslim Association of Britain spoke at the rally. “George Bush this week enshrined in legislation the CIA torture flights,” he said. “We had David Blunkett admitting that he wanted to bomb Al-Jazeera. We had the head of the British a rmy saying our troops in Iraq are making the security problems that we’re facing worse.

“They mean security problems within the Muslim community. They are implying there are extremists in our mosques, in our universities, in our homes – that our parents are ignoring the extremists among their own children. We reject it.”

The best cheers of the day, however, went to Yvonne Ridley, the broadcaster and Respect activist, who gave a blistering speech attacking the imperialism of Bush and Blair and also passionately defending her faith.

“There are those who have made it their business to promote disharmony between Muslims and the rest of the world, she said. “The prime minister and his cronies regard themselves as civilised while viewing us as backward, primitive, and whingeing.

“But these are the very people who have brought the words torture, rendition, kidnap and murder into our everyday conversations. Tony Blair and his master George Bush in the White House have caused the deaths of hundreds of thousands of innocents in Iraq, in Afghanistan, in Lebanon, with their own brand of extremism.”

Stop the War activists had a great response at various Glasgow mosques between Ramadan prayers, in the build-up to the event. Our United Against Islamophobia flyers were warmly received. Many said they couldn’t attend but pledged their solid support. 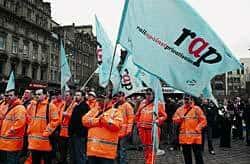