This article is over 12 years, 2 months old
Delegates at the Unite union conference overturned the executive council today and passed an emergency motion on the Labour Party leadership.
By Ian Allinson, chair of the Unite combine committee at Fujitsu, at Unite conference
Downloading PDF. Please wait...
Thursday 03 June 2010

Delegates at the Unite union conference overturned the executive council today and passed an emergency motion on the Labour Party leadership.

The motion reads, “Sadly our Party, the Party of working people, is now in opposition after losing the general election in May. One of the big issues used by both the Tory Party and the Media that support them is that our then Party leader had not been elected as either the leader of our country or even as leader of our Party.

“We must never again allow the Labour Party to be in the position of being portrayed as undemocratic or secretive. We must ensure that there is an open and transparent debate encompassing all the political views from within the party.

‘To do this we must ensure that all declared candidates for the Labour Party leadership receive sufficient nominations to be on the ballot paper so that the next leader can be chosen by all those who are entitled to have a say in the future of the Labour Party and not just by 255 people in Westminster.

‘Conference calls on the EC to request that members of Unite’s Parliamentary Group use their nominations in a way that ensures all candidates receive sufficient nominations. To be able to stand in the leadership election and thus allow the members and affiliates a say in the democratic election of the next Party leader.”

This was a lively debate. Delegates were keen to avoid a restricted contest between what one speaker called ‘the Milliballs’ which didn’t allow for a real debate or for the lessons of the defeat of New Labour to be learned.

The result reflected widespread anger among delegates about the executive’s opposition to the emergency motion. Delegates packed into a fringe meeting with John McDonnell MP last night, who hopes to stand as a left candidate for Labour leader.

John said that unions such as Unite asking MPs to use their nominations to ensure a proper contest was held was his only realistic chance of getting on the ballot paper. 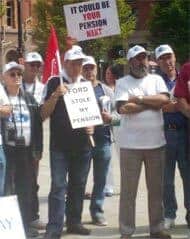