Uniting together to stop the Nazi BNP

This article is over 12 years, 8 months old
Anti-fascist activists have been out in force over the last few days campaigning to stop the British National Party (BNP) making gains in the European elections on 4 June.
By Esme Choonara
Downloading PDF. Please wait...
Tuesday 19 May 2009

Anti-fascist activists have been out in force over the last few days campaigning to stop the British National Party (BNP) making gains in the European elections on 4 June.

One key event they are building for is the Love Music Hate Racism (LMHR) festival in Stoke next Saturday 30 May. This will be a chance to rally thousands of people opposed to the Nazis.

LMHR has unveiled a raft of new headline acts for the festival including US R&B star Kelly Rowland, a founder member of Destiny’s Child who has had a series of hits as a solo artist.

Kelly said, “It’s great to be involved in such a worthwhile cause. Racism is still an issue in everyday society and I think it’s so important to help raise awareness.”

She will be appearing alongside other top performers including Clash legend Mick Jones, hip-hop band N-Dubz and soul star Beverley Knight.

Comedian Eddie Izzard will be among those compering on the day.

Transport to the festival has been booked from towns and cities across Britain.

Weyman Bennett, joint secretary of Unite Against Fascism (UAF), said, “The festival will be a great opportunity for anti fascists to come together, celebrate our collective strength and help build a mass movement that can drive the BNP out of the political arena.

“UAF wants to helps create an electric political atmosphere on the day that wins people in their thousands to the anti-fascist movement.

“We need UAF supporters to buy tickets for the event, book coaches locally and help out on the day to make sure everyone who attends is asked to get involved in the campaign to drive back the BNP.”

The festival is part of a flurry of anti-fascist activity.

Across the north west of England—the BNP’s target seat for the European elections—anti-fascists were out making their mark over the weekend.

They were out leafletting shopping centres and door-to-door in cities and towns including Salford, Stockport, Manchester, Leigh, Whitehaven, Penrith, Wigton and Pendle.

Anti-fascists were also out in Carlisle, where the BNP has been active as it clearly hopes to pick up new votes there.

A rally in the city centre last Friday night brought together trade unionists from the northern region of the TUC, the RMT, PCS, Unison and UCU unions as well as local residents and anti-racist campaigners.

UAF activists also joined a day of action in Carlisle the next day, handing out hundreds of leaflets in the city centre.

A woman who runs a bridal studio asked for literature to display at an event she is holding in the town.

Paul from UAF told Socialist Worker, “I have never experienced such an appreciative response from people.

The majority in Carlisle do not support the BNP. We need to keep mobilising that majority to increase the anti-fascist turnout in the election.”

The BNP hopes to benefit from the anger over MPs’ expenses and the recession, as well as the meltdown in Labour’s vote and the general climate of racism.

Despite its attempts to hide its fascist face, the mask keeps slipping.

BNP graphic designer Helen Forster was convicted of intimidation this week after she urged children on as they threw eggs at the home of an Asian neighbour in Gravesend.

BNP London Assembly member Richard Barnbrook faces suspension from the assembly after admitting that he invented three murders in the borough of Barking to highlight knife crime.

Activists are determined to drive the Nazis back.

Postal workers in many parts of the country are refusing to deliver BNP leaflets (see xxxxxxxxxx).

Around 150 people rallied against the BNP in Barnsley last Saturday.

George, a local UAF activist, told Socialist Worker, “Local MP Mick Clapham spoke about forming the Anti Nazi League in the 1970s to stop the fascist National Front and how we have to stop the BNP today.

“A South African refugee explained how black miners there supported the Miners’ Strike in 1984 while the BNP supported legal action to break it.

“The demonstrators marched down to a stall the BNP have in the precinct to chant slogans and call for their removal from the town centre.”

The BNP is also standing more than 450 candidates in council elections on 4 June.

Laura from Bristol UAF told Socialist Worker that they had three teams out on Sunday leafleting against the BNP, which is standing in eight council seats across the city.

She said, “We began leafleting two weeks ago and support has grown each day.

“Many people have signed up at UAF stalls to help leaflet in the area. Residents commented that they had had leaflets from the BNP and were pleased to see us out with our anti-racist message.

“We have asked people in our workplaces to help out and most people agreed, even if just to leaflet their own street.

“We have just over two weeks to continue to spread the anti-fascist message and show that we are all proud of our multi-cultural city and we want it to stay that way!”

Support from the NUT teachers’ union has boosted the campaign in the Bristol area.

South Gloucestershire, North Somerset, and Bristol NUT have together raised around £15,000 from the union’s political fund to pay for 65,000 leaflets, and billboard and newspaper adverts urging people to use their vote against the BNP.

There has also been a rush of LMHR gigs and events across Britain. In the town of Workington in Cumbria around 100 people attended an LMHR gig last week organised by the PCS civil service workers’ union.

A local activist reported that “speeches from the stage helped to galvanise audience members to help with activity and leafleting”.

In Waltham Forest in east London, UAF members put on a gig that raised £450.

Dean, one of the organisers, told Socialist Worker, “The evening was a great success. Over 90 people danced the night away.

“The message was plain and simple—get to Stoke on 30 May and use your vote on 4 June to stop the fascist BNP.”

To get involved in UAF activities in your area, go to» www.uaf.org.uk

For more on LMHR and to book tickets for the Stoke festival go to » www.lovemusichateracism.com 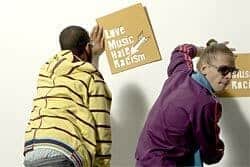