University of East London lecturers fight for respect at work

This article is over 9 years, 6 months old
Around 60 lecturers and their supporters protested at the University of East London today (Wednesday) against management plans to restructure the way they work.
By Siân Ruddick
Downloading PDF. Please wait...
Wednesday 18 July 2012

Around 60 lecturers and their supporters protested at the University of East London today (Wednesday) against management plans to restructure the way they work.

Management at the university want to tear up working agreements that apply to all staff, and instead make them negotiate their terms of working individually.

Jacqui Mitchell is the UCU branch chair at the university. She told Socialist Worker, “This is an attack on the equality of opportunity. It can lead to favouritism and bullying.

“Managers will be able to turn to people and say, ‘your colleague marks a paper in eight minutes, why does it take you ten?’”

The workers are determined to beat the attack. They voted for strikes, and action short of a strike, in a recent ballot. They plan to walk out at the beginning of next term.

“This is a classic management strategy,” Jacqui went on. “They’re using the economic crisis as an excuse to attack us. And if they get away with it here university managers across the country will think they can get away with it too’.

Students, sabbatical officers and representatives from the Unison and Unite unions in the university also joined the protest. They chanted ‘What do we want? Respect’.

The university have already outsourced security services and are trying to do the same in catering. This has already led to an attack on workers’ pensions.

A Unite representative told the crowd, “I have no doubt that if these issues are not resolved, we will be joining you in a campaign of industrial action in the autumn.”

This was met with cheers from the protest and many drivers honked their car horns as they drove past.

Mark Campbell, a lecturer at London Metropolitan University, summed up the mood by saying, “This is not a fight we can afford to lose. We need to fight with the full weight of the union.” 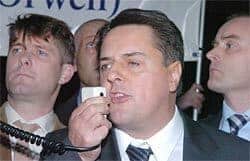