Unofficial post walkout in Plymouth forces bosses to back down

Postal workers in Plymouth staged an unofficial walkout on Monday of this week.

Some 100 members of the CWU union at the West Park delivery office refused to work after management brought in six agency workers.

And another 100 workers at the neighbouring North Central office walked out in solidarity – forcing a significant interim deal from bosses.

Workers at West Park have felt for a long time that staffing levels and hours available were too low.

But bosses had ignored calls for part time workers to be given full time contracts, to take on more staff or give more overtime.

When workers found management had brought in six agency workers on less pay instead, they walked out.

CWU rep Ali Sinclair said, “The Royal Mail has got no respect for its staff, it is as simple as that.

“We have no animosity towards the agency staff – it is not their fault they are getting paid less. Our animosity is with Royal Mail and their approach towards their own staff.”

Bosses were forced to negotiate after the action spread to North Central – affecting deliveries in four Plymouth post codes.

Workers voted to return to work at a mass meeting on Tuesday morning after bosses agreed to stand down the agency workers.

Vacancies will be filled by part time workers, and there will now be talks to find a long term solution.

The move to bring in agency workers breached an agreement between Royal Mail and the CWU. This says bosses cannot use agency workers if existing staff can be offered more hours.

The agreement is part of the Agenda for Growth deal, which followed the privatisation of Royal Mail in 2013.

The deal gave some protection to workers’ terms and conditions. But it also included a no-strike agreement until 2019 and tied the CWU to helping management make Royal Mail more “efficient” following the selloff.

Now some CWU members wonder if the move at Plymouth was the start of a bigger offensive – and say the action could have spread even further.

But the walkout has shown that unofficial action can stop bosses’ attacks in their tracks.

Ali said, “Royal Mail are the privatised machine that always reneges on deals. Yesterday Royal Mail said they would not be held to ransom by the union – today we’ve got an agreement.

“This proves that strong union organisation, and local strikes can win.”

Thanks to Dave Franklin 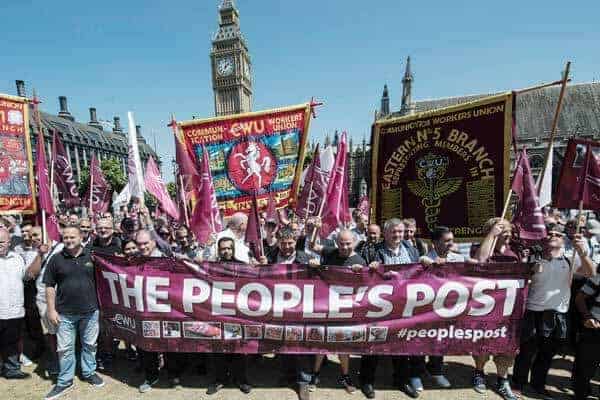