This article is over 14 years, 7 months old
Hundreds of workers at the Babcock dockyard in Rosyth in Fife, took unofficial strike action on Wednesday of last week in protest at management’s attacks on their pensions.
Downloading PDF. Please wait...
Wednesday 20 June 2007

Hundreds of workers at the Babcock dockyard in Rosyth in Fife, took unofficial strike action on Wednesday of last week in protest at management’s attacks on their pensions.

At a lunchtime mass meeting, members of the five unions at the yard – GMB, Ucatt, Prospect and the Amicus and T&G sections of the new Unite union – voted 621 to 11 to reject management changes to their pensions.

At the end of the meeting workers walked out – the first unofficial action since the yard was privatised in the 1980s.

The changes would increase workers’ contributions from 1.5 percent to 6 percent of their wages, reduce pensionable pay and raise the retirement age to 65. Currently 60 percent of the workforce are entitled to retire at 60.

Craig Nicol, an engineer at the yard, said the proposals amounted to “a pay cut by stealth”. Another worker who walked out said that it was brilliant to see solidarity between white collar and blue collar workers. He said, “It is the first time in a long time everyone has been standing together.

“The company wants to take as much money from us as they can without giving anything back.”

They returned to work on Thursday and are now set to hold a ballot for official strike action.

Nine to one vote for London schools strike 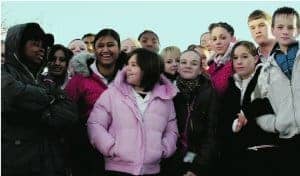 Battling back against corporate greed