The British trade union movement faces a severe challenge, and it must not back off.

British Gas, a major employer, has outrageously told striking workers they will be sacked because they won’t accept a new contract with a 15 percent pay cut.

It’s a gross example of the “fire and rehire” policy that all unions say they bitterly oppose. Around 7,000 GMB union members at British Gas have struck for 42 days. Bosses at British Gas’s parent company, Centrica, gave them the final ultimatum on Monday.

They have been piling pressure on workers to accept the pay cut and other harsh changes for months. But many workers defied the intimidation and threats, and refused to sign.

They received an email from Centrica on Monday evening. It said, “We have spent months in collective consultation and negotiation with our trade unions however we were unable to reach collective agreement on the new terms and conditions.

“We gave you the opportunity to individually accept the new terms. As you did not do so, we entered into a period of individual consultation with you but unfortunately you have still not accepted the new terms.”

It gives 14 April as the date for the job to end—without redundancy pay.

Ben, a British Gas engineer who refused to sign the new contract, told Socialist Worker he won’t give in to bosses’ bullying.

“We’ve had a constant barrage of emails from the company telling us how much money we’re losing by going out on strike,” he said. Workers have fought valiantly, but GMB national leaders have failed to lead at key points.

They called off planned strikes on the coldest weekend of the year for fruitless talks. They put a rotten deal out to ballot without a recommendation, and only workers’ resolve stopped it going through. The union told workers, “If you plan to stay with British Gas after 31 March and intend to ultimately sign a new contract, our lawyers’ advice is to do so by noon on 25 March.”

Ben said, “It’s been the workers from the ground up who’ve driven this forward. We have picketed despite not having official places of work—no depots. And we’ve done it all in a pandemic.”

This is not just about 7,000 engineers or British Gas.

The whole trade union movement should be in uproar. If bosses force these cuts through—in a highly profitable company—many other firms will think they can do the same.

The GMB should immediately call an all-out strike. Unions, starting with those with members at British Gas who haven’t been striking, need to join it whether it’s legal or not. And the whole trade union movement should back the struggle financially and physically. 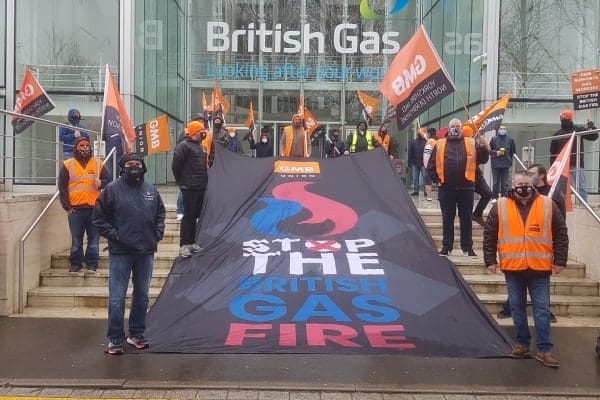