This article is over 11 years, 10 months old
A meeting called by the British Medical Association tonight (Thursday) sent out an urgent call for resistance to cuts that could devastate the NHS.
By Charlie Kimber
Downloading PDF. Please wait...
Thursday 25 February 2010

A meeting called by the British Medical Association tonight (Thursday) sent out an urgent call for resistance to cuts that could devastate the NHS.

Around 250 people came to the meeting entitled “London…on the brink” – and they heard plenty of evidence to show just how urgent the situation is.

A third of hospital beds could go in the capital as billions of pounds of cuts tear apart the health framework at every level.

The plan comes from NHS London, which has been receiving advice from the management consultancy firm McKinsey on how to make huge “efficiency savings”.

John Lister, who has produced a detailed analysis of the cuts plans for the BMA, told the meeting that “discussions are taking place behind closed doors and in secret documents”.

He said the real agenda was “a wholesale reduction in hospitals, community services and primary care”. This amounts to cuts of up to £6 billion in the next five years.

John Lister said this reminded him of the wave of cuts proposed in 1984 by Tory chancellor Nigel Lawson.

“The cuts are political,” said John. “They’re not party political because both Labour and the Tories are committed to essentially the same programme.”

He explained that although these parties said they would increase health spending in line with inflation, this did not take account of the need to increase spending by another 4 percent a year just to keep up with an ageing population and price rises for drugs.

John said that 13 or London’s 36 hospitals faced being downsized or worse – with closures a real possibility.

“NHS London admits it plans to close one third of London’s hospitals beds, the equivalent of 12 district general hospitals,” he warned. “In the seven boroughs of North East London there will be £500 million cuts. That means 827 beds going, half at King George hospital – which will be dismembered.”

The cuts require a reduction of around a third in nursing costs, a quarter in drug costs and a productivity rise (working harder) of 42 percent.

GPs would be told to cut their consultation times from 12 minutes a patient to eight.

The plans, based on a model put forward by Lord Darzi, envisage a network of polyclinics to take over the services presently provided to seven million people in hospitals’ outpatient or accident and emergency departments.

The warped logic of the cuts is perhaps best shown by the situation at Bart’s hospital where 200 beds are to go at the same time as 1,000 beds are being created in a new building built under the Private Finance Initiative.

The public sector will have to keep handing over the full cost to a private firm even though the beds won’t exist!

John said that on a local level people do not support the cuts. He challenged MPs and councillors to decide whether they were going to stand with the authorities pushing through the cuts or to be part of the anti-cuts campaigns.

Consultant surgeon Anna Athow said that 22 of the 31 acute hospitals have an uncertain future. They could be stripped-down, possibly left without a&e or maternity provision – and that meant a big question mark over their existence at all.

She argued that polyclinics are not hospitals and do not provide a full range of vital services.

Consultant radiologist Jacky Davis from the Whittington Hospital said that doctors must organise and cannot “keep their collective heads down”. She called for a pan-London coalition to defend the NHS and insisted the cuts “are not a done deal, we can change things”.

Bronwen Handyside from Keep Our NHS Public denounced health cuts that were being driven through to pay for a bailout of the bankers. She said “commercialisation dehumanises healthcare” and called for a working coalition of all those who were against the cuts.

Finchley GP Laurence Buckman, who chairs the BMA’s GP committee, said the cuts plans would mean fewer GPs and that polyclinics would not be resourced like hospitals and could not deal with acute cases. These cuts “will turn a crisis in healthcare into a disaster,” he predicted.

Speakers from the floor stressed the importance of local resistance to cuts at Chase Farm hospital, Whittington Hospital, Finsbury health centre, and to plans for private firms to invade Camden GP services.

There was enthusiasm for further more local meetings, support for demonstrations against the cuts such as over the Whittington this Saturday, and for using the run-up to the election as a time to put pressure on politicians of all parties.

Several speakers stressed the importance of the 10 April demonstration in support of the public sector and welfare services called by the National Pensioners Convention and backed by 22 trade unions and campaign groups.

The scale of the cuts demands a speedy response. Unison, Unite, GMB and other unions must start a real fight locally and across London. They must back fightbacks by workers or community campaigns, including occupations if necessary.

The BMA is holding a hustings meeting on 24 March and a major public meeting on 24 April. It urges everyone to sign up to its Look After Our NHS campaign.

For the BMA campaign go to » www.lookafterournhs.org.uk

For Keep Our NHS Public go to » www.keepournhspublic.com 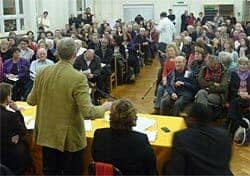 Whittington campaign: ‘We’re taking to the streets for our hospital’