US casualties are on the rise

This article is over 17 years, 4 months old
THE CASUALTY rates for US and other troops occupying Iraq have rocketed upwards this month.
Downloading PDF. Please wait...
Saturday 28 August 2004

THE CASUALTY rates for US and other troops occupying Iraq have rocketed upwards this month.

This is despite claims by the US and British governments that things are returning to normal in Iraq.

And despite the media focus on the Shia holy city of Najaf, where occupation troops are besieging the Mahdi Army led by Moqtada al-Sadr, most of the US deaths have occurred elsewhere in Iraq.

According to figures from the US Central Command, some 52 American soldiers have died in Iraq this month.

Nine troops from other countries were killed, including four from Britain and three from Poland.

Of the 61 occupation fatalities, 18 occurred in the al-Anbar province of Iraq, which includes the rebel city of Fallujah.

Another 11 took place in and around Baghdad, with a further 11 in Najaf.

Occupation troops face fierce resistance all across the country, with the partial exception of the Kurdish-populated north.

Each day since the “handover of power” on 28 June has seen an average of 49 attacks against US forces, according to figures compiled by USA Today.

The most common form of attack is a roadside bomb, or “improvised explosive device” in Pentagon jargon, typically rigged out of artillery shells.

At least 18 American deaths in the past two months have been attributed by Central Command to these devices.

Rockets and mortar attacks by the resistance are also common, as is firing on US aircraft and helicopters.

The prospect of the occupation getting bogged down for years in a Vietnam-style quagmire is now being openly floated by senior US military figures.

“If we have the political will and stamina to stay, I could see this going on for ten years,” says Randolph Gangle, who heads the US Marines’ Centre for Emerging Threats and Opportunities.

The Iraqi resistance is not under the control of any one political faction or leader, making it harder for the Americans to put it down.

“It is not classical guerrilla warfare in the sense there is no one in charge of it,” says US colonel Larry Brown, who recently returned from a tour of duty in Fallujah.

“There is no pressure point. There is no rebel leader that you would find in a Central American guerrilla war.”

Their lies to justify killing

US soldier says he won’t fight for Bush 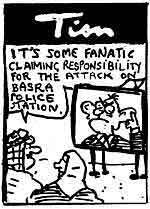