US empire is rocked by Israel’s defeat

This article is over 15 years, 5 months old
A guerilla army a few thousand strong has humbled the fifth most powerful army on Earth, backed by the world’s strongest superpower.
By Joseph Choonara
Downloading PDF. Please wait...
Saturday 19 August 2006

A guerilla army a few thousand strong has humbled the fifth most powerful army on Earth, backed by the world’s strongest superpower.

The Israeli government has learnt, just as George Bush is now learning, that a high tech army can butcher thousands, maim tens of thousands and displace hundreds of thousands of civilians, but it cannot secure victory against a determined resistance that enjoys mass support.

In the final 18 hours before the United Nations (UN) ceasefire began, as Israeli ground forces launched a last ditch assault on Lebanon, Hizbollah was still able to fire 250 missiles in retaliation.

The scale of the resistance to the invasion has sent shockwaves through Israeli society. A war that was supposed to prove the ability of the Israel Defence Forces (IDF) to overcome any foe in fact showed its vulnerability.

The defeat has wider implications for Israel’s relationship with the US. The Bush administration had for weeks stalled diplomatic attempts to reach a ceasefire in order to give its ally every opportunity to crush Hizbollah. As journalists in the Israeli daily Ha’aretz pointed out last week:

“Should the IDF lose its aura of invincibility in American eyes, Israel’s perceived value as an ally could decline sharply… As Israel’s leaders once understood, the Washington-Jerusalem strategic partnership has always been nurtured by a steady stream of Israeli successes, both in defending its own security and in advancing American interests.”

The destruction of Hizbollah, seen by the White House as a key ally of Iran, was one way in which the Israeli attack dog sought to please its master – and it was part of a far wider plan.

Gideon Levy, an anti-war columnist in Ha’aretz, wrote this week, “It is not difficult to imagine what would have happened if Hizbollah had been defeated within a few days from the air, as promised from the start by the bragging heads of the IDF. The success would have made us insane.

Instead, the resistance across the region has been strengthened. Faced with defeat, the Israeli government was forced to turn to the United Nations (UN) in an attempt to secure through diplomacy what it could not achieve through force of arms.

The US was also forced to drop its opposition to a UN deal. According to the New York Times, “A senior Bush administration official said that it increasingly seemed that Israel would not be able to achieve military victory, a realisation that led the Americans to get behind the ceasefire.”

The resulting UN resolution remains heavily weighted towards Israel. It demands the “cessation by Hizbollah of all attacks”, but only an end to “offensive military operations” by Israel – which has always claimed its assaults are “defensive”.

As Socialist Worker went to press it remained unclear whether the ceasefire would hold.

Thousands of Israeli troops remain in southern Lebanon, and Hizbollah has vowed to defend the country from any further attacks.

There is also the danger that, having suffered a blow to their ambitions to dominate the region, the Israeli and US governments may decide to risk further escalation.

The continued threats against Lebanon, Syria and Iran, along with the carnage wrought by the US in Iraq and Afghanistan make the anti-war movement as crucial as ever.

Lebanon: eyewitness to the Israeli attacks

A new grouping of forces is emerging in Lebanon

Euphoria across the Arab world at Israel's withdrawal 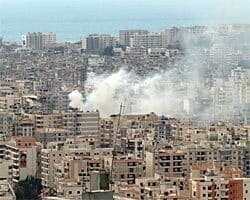 The hidden story of Lebanese prisoners held in Israeli jails