This article is over 12 years, 11 months old
"We are like the bull that repeatedly charges a matador’s cape – only to tire and eventually be defeated by a much weaker opponent."
By Simon Assaf
Downloading PDF. Please wait...
Tuesday 01 September 2009

“We are like the bull that repeatedly charges a matador’s cape – only to tire and eventually be defeated by a much weaker opponent.”

This is the candid admission by US General Stanley McChrystal on the state of the occupation in Afghanistan.

McChrystal, who was appointed overall military commander in Afghanistan in June, made his comments ahead of a new report that paints a grim picture of the occupation.

He has hinted that the US will have to send even more troops to shore up the occupation – on top of the 21,000 extra troops sent by US president Barack Obama on taking office.

There are currently over 95,000 foreign troops in the country. But the Canadian and Dutch contingents are planning to pull out by the end of next year, while other Nato countries are resisting calls to pour in more troops and equipment.

McChrystal’s statement is the clearest indication so far that the so-called “Af-Pak” strategy Obama inherited from the Bush administration has run into the sand.

The original plan was that once the Taliban was on the back foot, the occupiers could cut a favourable deal and declare victory. But despite two bloody months of fighting, and an ever rising death toll, the insurgents simply moved their operations elsewhere.

Pakistani resistance fighters have opened up a new front along the Afghan border with the Pakistani state of Baluchestan, while the Taliban has seized two key provinces along the border with Central Asia.

According to reports, the insurgents have set up roadblocks and ambushed supply convoys coming from the newly-opened northern routes.

Foreign forces lost 153 soldiers in July and August, more than the whole of 2005. The rising death toll has turned public opinion in Britain and the US against the war.

The weekly parade of coffins has created a deep crisis for Gordon Brown. He made a surprise visit to British troops in Afghanistan last week where he called for negotiations with the Taliban. But the US is demanding even more British troops be deployed.

Hamid Karzai, the Afghan leader, looks set to win presidential elections on the back of widespread ballot rigging, bringing more woes for the US.

The counting has not officially ended, but allegations of widespread fraud have stripped the contest of any credibility.

The US had hoped that Karzai would be replaced by his “moderate” rival Abdullah Abdullah and restore some international credibility to the Afghan government. With its military and political strategy floundering, the crisis in the occupation looks set to become much deeper.

National Demonstration in London, 24 October
called by Stop the War, CND and the BMI.
Go to » www.stopwar.org.uk

Protest called at arrest of Joe Glenton, the soldier who has spoken out against Afghan war 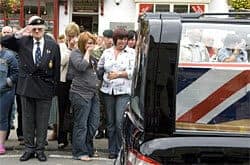 Wootton Bassett: ‘Why are we fighting this war - nothing good is coming of it, only sadness?’