This article is over 14 years, 9 months old
Anti-nuclear activists from across Britain and around the world met in London last Saturday to discuss the new US moves towards a missile defence system and how this is provoking a new Cold War.
By Matthew Cookson
Downloading PDF. Please wait...
Tuesday 04 September 2007

Anti-nuclear activists from across Britain and around the world met in London last Saturday to discuss the new US moves towards a missile defence system and how this is provoking a new Cold War.

The Campaign for Nuclear Disarmament (CND) organised the conference.

The US wants to install its nuclear missile defence system across Europe, and the British government is allowing it to use the Menworth Hill and Fylingdales military bases as part of this.

Kate Hudson, the chair of CND, said, “This system has nothing to do with defence. It is about facilitating aggression. It will allow the US to launch a pre-emptive attack without fear of retaliation.

“Russia sees this as a strategic threat. We do not want a new nuclear arms race. It would be far better if the US ditched its missile defence plan.

“The British government is coat-tailing the US on this and is out of step with the majority of the public, just as it is over the war and occupation of Iraq.

“There is the danger of a new Cold War inspired by the US’s missile system.”

There has been opposition to the US plans in many parts of Europe. Jan Neoral, the mayor of Trokavec, the town in the Czech Republic chosen by the US to “host” a nuclear missile defence radar base, told the conference about how the town was organising against the US’s plans.

A local referendum voted almost unanimously against the radar and the mayors of the surrounding area have come together to oppose the base.

“So many people have become involved in the fight on this issue.

“For the first time since 1989 a progressive civic movement has emerged in the country.

“The majority of Czech people are against the plans. We had a big demonstration against George Bush when he came to Prague earlier this year.”

Filip Ilkowski from the No Wars Initiative in Poland said, “We have built against Poland’s involvement in the ‘war on terror’ and now we are also involved in battling the US bases.

“The US wants to put missiles in Poland. In a recent poll 56 percent of people said they were against this. There has been a change of mood towards the West over the last ten to 15 years. 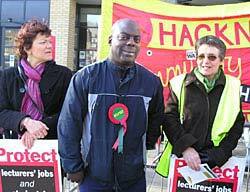