This article is over 20 years, 0 months old
PEOPLE IN the poor African country of Somalia feared this week that they were to become the latest targets in the US \"war on terror\". The US, and key allies Britain and France, have increased surveillance flights to four or five a day over Somalia in the last week.
Downloading PDF. Please wait...
Saturday 12 January 2002

PEOPLE IN the poor African country of Somalia feared this week that they were to become the latest targets in the US ‘war on terror’. The US, and key allies Britain and France, have increased surveillance flights to four or five a day over Somalia in the last week.

There are due to be three Marine Corps units of 1,200 troops each in the Arabian Sea near Somalia by mid-January. The increased threat comes after a warning by United Nations agencies just before Christmas that 500,000 people in Somalia face severe food shortages. After an international appeal for food only a quarter of the 20,000 tonnes needed was received. But the US views such people in need as ‘terrorists’. US defence secretary Donald Rumsfeld claimed there were Al Qaida bases in the country last week:

‘We know there have been training camps there, and they go inactive when people get attentive to them.’ ‘We are working to ensure that Somalia does not become a haven for terrorists,’ said State Department spokesperson Richard Boucher. The US closed down Baraakat, a major Somalian bank, last year, claiming it sponsored terrorists.

Many Somalis relied upon Baraakat to receive money from relatives overseas. The closure has driven more people into poverty and desperation. Somalia is just one of the targets that the US may hit in the wake of its war against Afghanistan. But Afghanistan is hardly a model of peace and stability brought about by US bombing.

When Tony Blair flew into the country this week he did not even dare to leave the heavily guarded airport. US bombs continue to kill civilians in Afghanistan. On Monday of this week the Guardian investigated the US bombing of the village of Niazi Qalaye on 29 December, which Socialist Worker reported last week.

The US claims that only Taliban and Al Qaida fighters were killed there. But the Guardian found that over 100 civilians were killed. Reporter Rory Carroll described ‘bloodied children’s shoes and skirts, bloodied schoolbooks, the scalp of a woman with braided grey hair, wedding decorations’. He went on, ‘Precision guided bombs vaporised occupied buildings and a second wave an hour later hit people digging in the rubble and, judging from hair and flesh on the edge of three 40-foot holes some distance from the complex, those trying to flee.’

The US war has bolstered the power of brutal local warlords. The major Afghan city of Jalalabad is ‘a city in the hands of thugs and crooks’, according to C J Chivers of the International Herald Tribune: ‘Now the Taliban are gone the city is run once again by warlords and guerrillas. Corruption runs unchecked through what counts as the local government, a group of ill tempered guerrilla brigades.

‘They welcome outsiders with threats and extortion, and steal food from aid convoys.’

Ready to respond to future attacks

By Lindsey German, convenor of the national Stop the War Coalition

TONY BLAIR has proudly proclaimed success in the war against terrorism. Anti-war campaigners should be much more sceptical, since even on the most basic level this is simply not true. The war in Afghanistan is drawing to the end of its first phase, but Mullah Omar and Osama Bin Laden remain uncaptured. Bombing continues, causing much death and devastation.

The international instability caused by the war is all too apparent around Kashmir and Palestine. Intervention in other countries which are supposedly harbouring terrorists looks a certainty. It is vital that the success of the anti-war movement is built upon. The Stop the War Coalition steering committee met last week to plan our future activities.

It was generally agreed that we have to respond quickly in the event of an escalation of the war or its extension to other countries. However, the timing and scale of such a response is to a certain extent beyond our control.

We know that argument continues in Washington about how quickly to strike against Iraq, how to keep the various Western allies on board, and how to balance between regional powers such as India and Pakistan. It was felt that the coalition should postpone its planned national demonstration with CND, scheduled for 26 January, until the situation becomes somewhat clearer.

The next national demo is likely to be at the end of February or the beginning of March. Instead on 26 January we want to call a mass protest outside the Israeli embassy in London.

This is to highlight the terrible attacks on the Palestinians by the Israeli government of Ariel Sharon in the name of the ‘war against terrorism’. We want all London groups to fully mobilise for this, and groups outside to send support where possible.

There are many local activities going on, such as the protest against Trident in Plymouth in early February, which can be a focus for local groups. We are also trying to organise a number of public rallies and teach-ins. Teach-ins on ‘Was the war really a success?’ can attract large numbers of people to debate some of the war’s central questions, but also to look at issues such as Kashmir in more detail.

Public rallies with a wide range of speakers can put across an analysis of the situation and help to mobilise for future activities. The war is not going away. The level of campaigning may not be as high as at the height of the bombing, but most of those who supported us then are still around. Make sure the coalition remains a focus for debate and activity, ready to respond to the next big attacks. 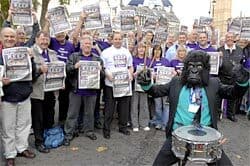