This article is over 15 years, 11 months old
Sarah Allen from the Unison public sector union and Jane Hardy from the Natfhe lecturers’ union were among the British trade unionists attending the WSF. They met with teachers and some of those taking advantage of Venezuela’s ambitious education and literacy programmes
Downloading PDF. Please wait...
Saturday 04 February 2006

Sarah Allen from the Unison public sector union and Jane Hardy from the Natfhe lecturers’ union were among the British trade unionists attending the WSF. They met with teachers and some of those taking advantage of Venezuela’s ambitious education and literacy programmes

‘At the WSF we were invited to a meeting of teachers. We met some of the leaders of the UNT, the new radical Venezuelan trade union. They gave us a warm welcome.

One of them had previously been on a tour of British trade unions to try to get support for the Venezuelan revolution.

We also met a group of rank and file teachers who had been sent to the WSF from all over the country.

One of Chavez’s main priorities has been to increase access to education.

The school day has been lengthened and children are given two meals a day. This is a major measure for combating poverty as well as ensuring that children get the best out of their education.

The approach to education is to get more young people into university, as well as providing education for those who missed out in the past.

This is captured in the slogan, “Every grandmother should read.” Old women in the barrios are extremely excited by the possibility of being literate.

The teachers said that these changes were part of the revolution. They saw their role as trying to bring in a new set of values.

They emphasised the idea of community in contrast to the individualism of neo-liberalism.

It is important to emphasise that changing ideas is a huge challenge when elements of the old state and the old elites still exist.

The newspapers and most television channels, are anti?Chavez and still dominated by big business.’

Simon Hall was sent to the WSF as a delegate by Unison’s northern region. He met with Venezuelan workers

‘I’ve seen that it’s possible for workers to organise and run industries, and for the promoters of profit to be pushed back.

At Invepal, a paper factory west of Caracas, workers were told by the owners that they had to join the bosses’ lockout called to overthrow Chavez three years ago.

After it failed, management closed the plant saying it was unprofitable. Workers occupied and went out to build widespread community support.

They won – the factory is back in production, half owned by the state, half by the workers. Profits are used to provide welfare for local people.

I’m returning to Britain ready to organise to strike over pensions, arguing that we need to carry that spirit into our unions and build that kind of unity.’ 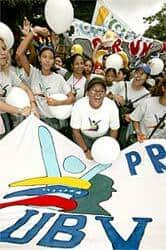