This article is over 12 years, 10 months old
A wave of protest in support of the Vestas wind turbine workers took place across Britain on Thursday. The workers occupied their factory in Newport on the Isle of Wight, after bosses announced that it was to close. The occupation, and the workers’ fight for jobs and the planet, inspired tens of thousands of people.
Downloading PDF. Please wait...
Friday 18 September 2009

A wave of protest in support of the Vestas wind turbine workers took place across Britain on Thursday. The workers occupied their factory in Newport on the Isle of Wight, after bosses announced that it was to close. The occupation, and the workers’ fight for jobs and the planet, inspired tens of thousands of people.

Despite the end of the occupation, the battle to save the plant is continuing, with Thursday’s national day of action on the latest stage. Vestas workers and their supporters marched through Newport.

Action around the country includes the following.

Protesters also gathered outside the Department for Energy and Climate Change in London.

“We want to bring Vestas under public control,” said John McDonnell. “We will stand in solidarity with the Vestas workers for as long as it takes—not only to get their jobs back but also to force the government to take action on climate change and renewable energy seriously.”

Darren Johnson, a Green Party London assembly member, said, “We need a sea change in attitudes towards climate change. The government could create thousands of jobs in wind power alone.”

Many spoke about what they had done to build support for the Vestas workers. “Today teachers across Britain taught assemblies and lessons on renewable energy and climate change,” said Jess Edwards, a teacher and NUT member in Lambeth, south London.

“We should carry the spirit of Vestas into the trade unions—I want to see occupations of schools threatened with closure.”

Nick Hutton from the Campaign Against Climate Change said, “You cannot negotiate or make deals with climate change.” He argued that activists needed to fight for a global campaign to force governments to act to save the environment.

More trade unionists and peace campaigners gathered for a public meeting later in the evening. Mark Flower, a former Vestas occupier, addressed the meeting. “We occupied because we had had enough,” he said. “Our employers had told us that our jobs were safe. But then they told us we had just three months until the jobs were up.

“When we occupied we got a lot of support from everyone on the island. Vestas is the biggest private employer on the island and there aren’t many other jobs there for people.

“Gordon Brown has said he’s going to create green jobs but we know it’s a lie—he isn’t doing it. Lots of opinion polls show that people back the nationalisation of Vestas. We are continuing our campaign for green jobs.”

Many attacked the argument that we should stop criticising New Labour to stop the Tories getting in.

Jeremy Dear, general secretary of the NUJ journalists’ union, said, “If we didn’t have reason enough to build the protest at Labour Party conference, the last few days have reinforced them. Gordon Brown’s speech at the TUC conference failed to inspire any hope and will do nothing to tackle the crisis.

“We don’t want to see a Tory government. But we also don’t want a Labour government carrying out Tory policies and Tory cuts.

“Ed Miliband claimed that there was ‘nothing the government could do’ to nationalise Vestas. But they’re in the fucking government—of course there’s something they could do.”

Estelle Cooch from Fight for the Right to Work said, “Some people say we should batten down the hatches because of the threat of the Tories. But Labour should learn that the only way it will get re-elected is if it defends the working class.

“If Labour doesn’t listen and lose the election then at least we will have already built a movement to fight back.”

Lindsey German, convenor of the Stop the War Coalition, pointed to the links between the anti-war movement and the struggles for jobs. “We’ve heard today that activists who occupied a crane in support of the Vestas workers were arrested under anti-terror legislation,” she said. “The government is using the ‘war on terror’ to increase repression of ordinary people.

“The government is spending billions on disastrous wars in Iraq and Afghanistan. Are we really saying to our children the only jobs you can have are in the army?”

They built a mini wind farm on the development agency’s model of the Medway estuary. Paper windmills were handed to workers along with a satirical guide on building windmills, which instructed Seeda to cut up the contracts promising to give Vestas £3 million.

The protesters Vestas stand aside and allow its closed factory continue to be used for turbine blade manufacture.

Steve Wilkins of Medway Trades Council said, “Vestas workers have fought magnificently to save jobs and essential wind turbine manufacturing in Britain. The government says that Vestas have refused to sell it the factory, yet it is still rewarding Vestas with public money through Seeda.

Trade unionists and anti-climate change activists held a protest in solidarity outside the government offices of the West Midlands in Birmingham.

Protesters handed out 400 of the “Save Vestas” paper and called on passers-by to support the sacked 600 workers.

There was a very positive response from local people, who stopped and discussed how this government had failed millions of people on jobs and the climate.

One women said “These are the wind turbine people. It’s ridiculous as we need these green jobs now more than ever.”

Doug Morgan, the president of West Midlands NUT, said, “The government are only to happy to hand over tax payers money to the banks and nationalise them.

If it’s good enough for the people who caused the economic crisis then this government should nationalise Vestas now.”

Protesters are organising for the protest outside the Labour Party conference on Sunday 27 September, and to continue the fight. 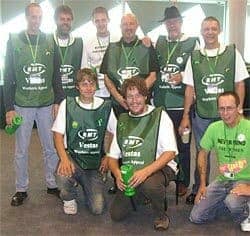