Workers at the Vestas wind turbine factory in Newport, Isle of Wight, have now been occupying their plant for more than two weeks against closure. The company got a court order on Tuesday for their eviction, but a group of workers have vowed to defy it. Vestas worker and occupier Ian Terry spoke to Socialist Worker immediately after the court judgement:

‘The fight’s not over. We won’t go quietly. If you believe in something you have to stand up for it.

We’re all so proud of what we’ve done—and what everyone’s done to support us. They’re going to try to evict us. But we’re staying.

We’re going to barricade ourselves in. They’ll have to come and get us.

We don’t know what to expect, but we’ll just have to wait and see.

My feeling is we have to put up a fight or we’ll regret it forever.

And we’ll keep fighting even if they drag us out of here.

The politicians in power aren’t there to help us—they’re out for themselves. The government says it wants green jobs. It should nationalise this factory.

We’re asking people to do whatever they can to help. Come down here if you can make it. But just as importantly, do something where you are.’ 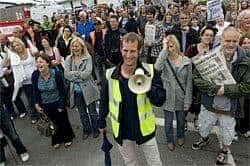