This article is over 12 years, 1 months old
"When I was in Colchester at military prison I shared a cell with Joe Glenton," says Ross. "Joe was jailed for refusing to fight in Afghanistan."
By Siân Ruddick
Downloading PDF. Please wait...
Tuesday 06 July 2010

“When I was in Colchester at military prison I shared a cell with Joe Glenton,” says Ross. “Joe was jailed for refusing to fight in Afghanistan.”

Before his imprisonment Joe had become active in the Stop the War campaign.

Ross says, “I told him my story and he said, ‘You’ve got to get out there and tell people.’

“So I want to speak out. Parents think it’s a good thing for their children to join up but it’s not.

“People are being killed in Afghanistan for nothing and the Ministry of Defence doesn’t care.

“All they’re worried about is looking after number one—themselves.

“Soldiers come back and get treated like shit. The army throws you on the scrapheap. The army has ruined my life. I want to make sure they don’t do the same to anyone else.

“The idea that people are comrades is just a joke—but being selfish isn’t what I’m like.

“I like helping people out, and you want people to do the same for you.

“I gave them everything, and what did I get in return?

“Things are very hard for me now I am back.

“I find it hard to talk to people, and my temperament has changed.

“I feel myself getting angry and feeling like I’m going mad.

“I’ve never been like that before, I’ve got a reputation of being a calm and polite person.

“But people have started to talk about my temper now.

“The army can destroy you. Some people leave and become alcoholics and addicted to drugs.

“I’m glad I haven’t turned out that way. I joined because I had nothing better.

“I see guys who don’t do very well in school and think it’ll make their family proud if they join the army. But it’s a waste of life.

“I saw in the paper a British soldier had died in Afghanistan after being shot in the face and all I can think is—what for?

Soldier Joe Glenton who was court martialled and imprisoned for refusing to fight in Afghanistan will be released from military jail in Colchester on Monday 12 July and Stop the War supporters will be there to welcome him. Details from www.stopwar.org.uk 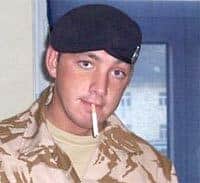