Voices from Respect’s Bradford West campaign: ‘It’s all about dignity’

This article is over 9 years, 9 months old
Anindya Bhattacharyya spoke to activists on the election trail about why they supported George Galloway’s bid to be MP
Downloading PDF. Please wait...
Friday 30 March 2012

Wasab Khan, 24, is one of many young volunteers that drove Respect’s by-election victory in Bradford West. He spoke to Socialist Worker on polling day about what had attracted him to the campaign.

“I’ve been into politics for a little while. I like the way George says what’s what, whether people like it or not. He supports the Palestinians and wants the troops back from Afghanistan. I don’t agree with Labour—they’re puppets who are told what to say and do. Truth is important.”

Wasab is keenly aware of the problems faced by young people in Bradford. “They’ve just opened a brand new police station on Thornton Road,” he says. “They’ve got the money to pay all those police officers. But if they really wanted less crime they’d spend that money on the community.”

The police routinely harass young Asians, he adds. Wasab recounts how he was driving a Respect speaker van on Wednesday night and was stopped by police, searched, taken to the station and then released. “They were just wasting my time,” he shrugs.

Wasab acknowledges that crime is a problem in the area, but says the media makes things worse by racialising the situation and presenting it as an “Asian” or “Muslim” problem.

In truth people in Bradford live far more mixed lives than these stereotypes suggest. “I work in a call centre,” he says. “It’s very mixed race. We all want the same thing—it’s all about love, peace and respect. It’s all about dignity.”

He sees Galloway’s arrival in Bradford as a chance to be seized to shake up the city’s politics and address its longstanding problems. “We’re lucky to have him here. I think he’ll make a difference if he’s elected. But we’ll see what changes he can make in three years if he gets in.”

Shabana Bashir works as an Esol tutor in Bradford teaching English to speakers of other languages. She has been a Respect activist for a few years now, standing in the 2010 local elections and campaigning with Stop the War and the Palestine Solidarity Campaign.

“I got involved because we need change round here,” she told Socialist Worker. “Education is going downhill. Buildings are crumbling. Jobs are disappearing. I’m a mother of three and I worry that they are going to grow up in a different world.”

Her job as an Esol tutor gives her a direct experience of how the economic downturn has hit people from communities across the city, she adds. “I know what cuts are coming in and how it’s affecting people. Everyone wants an education, whatever their different backgrounds.”

Arshad Ali was the Respect candidate in Bradford West at the 2010 general election and was Galloway’s election agent for the by-election.

He spoke to Socialist Worker about how the involvement of young people had transformed the campaign. “It’s incredible—the young people are definitely educating the older ones,” he says.

Galloway’s arrival in Bradford had tapped into and crystallised a longstanding disaffection with Labour, he says. “When I stood for Respect people would say, ‘We love what you stand for but we know you can’t win.’ The difference with Galloway is that we know he can win.”

“Labour don’t know what’s hit them. There have been defections in droves. People are fed up with being told to vote on family lines rather than on principle. If this goes well we’ll look at making a push at the council elections in May.” 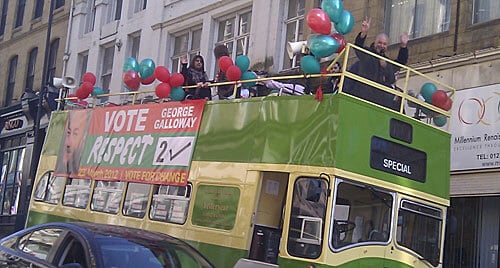