This article is over 19 years, 9 months old
People across England will have a chance to say a resounding no to Tony Blair's pro-privatisation and pro-war policies at the local elections on 2 May. Hundreds of Socialist Alliance candidates are standing. They say, \"Put people before profit,\" and want to take on the pro-business consensus accepted by the three major parties.
Downloading PDF. Please wait...
Saturday 06 April 2002

People across England will have a chance to say a resounding no to Tony Blair’s pro-privatisation and pro-war policies at the local elections on 2 May. Hundreds of Socialist Alliance candidates are standing. They say, ‘Put people before profit,’ and want to take on the pro-business consensus accepted by the three major parties.

‘Socialist Alliance candidates are now in place,’ says Rob Hoveman, the national secretary of the Socialist Alliance. ‘Activists are gearing up to knock on people’s doors and deliver millions of leaflets. Local alliances will also be organising stunts, cavalcades and stalls to attract attention to our campaign. We’re looking forward to having a lively campaign. This will contrast with all the other parties, particularly the Labour Party where activists are very demoralised.

‘The Socialist Alliance proved in the Greater London Authority election in 2000 and the general election last year that we can establish the most exciting and high profile campaign on the streets. Since then the conditions for building a genuine socialist alternative to Blair have improved. People are disgusted by Blair’s support for the war on Afghanistan and subservience to George Bush. His support for military action against Iraq is causing splits within the Labour Party. New Labour is continuing to privatise public services.

‘It is very important that we have a good election campaign following the success of the Socialist Alliance trade union conference. New Labour’s Tory policies have disillusioned millions of workers. The Socialist Alliance has to demonstrate it is the embryo of an organisation that can begin to give voice to the needs and interests of ordinary working people. This election is an important part of that.’

Socialist Alliance candidates are ordinary people who want a better world for the millions, not the millionaires. MATTHEW COOKSON spoke to some of them to find out why they are standing.

‘People are being let down by the government. It has been total rubbish-there’s no hope of turning that round. I’m a student in my mid-twenties at Southampton University and the NUS coordinator there. New Labour scrapped the grant and introduced tuition fees. New Labour are more pro-market than the Tories. I’m standing in Portswood, which is a student area. The housing is very poor. Because of student poverty most of my friends have to work to get by. The Socialist Alliance involves people with different views.We’ve got more in common than what divides us.’

‘I was a Labour councillor for seven years between 1992 and 1999. I resigned the whip because I opposed a local development that the Labour Party supported. For that I was expelled. I joined the Labour Party in 1984 during the miners’ strike. The party has got progressively worse since then. It’s so right wing now it’s unbelievable.

It has been awful since Blair became leader. It’s never been a really left wing party, but in the 1980s members had an opportunity to voice opinions and change things. That’s gone now. It wasn’t until the Socialist Alliance started that I got involved with politics again. Standing in the elections gives us the opportunity to raise the issues that the Labour government should be taking up.

I’m opposed to the privatisation of the Post Office. A lot of people are concerned about what’s going to happen in Iraq. In Watford there are office blocks standing empty when people haven’t got homes. I want to be part of giving people the chance to show what they really think. We’re going for it in this election.’

‘The Labour council here is attacking the most vulnerable. It is privatising elderly and home care, selling off the only elderly people’s home we have. The Labour government is making the poor poorer and the rich richer. There’s no democracy with Labour if you don’t do what they say. A local Labour councillor told me that he wouldn’t represent the people who voted no in the ballot on selling off my estate.

I’ve voted Labour all my life up until last year, when I didn’t vote as a protest. I’m opposed to the war on Afghanistan and the plans to attack Iraq. Tony Blair’s taken us into a war without even consulting with the people whether they want to go to war.

When Blair comes on the TV smiling I want to kick it in. I’ve lived on this estate for 37 years and always been active, helping to set up two tenants groups. I used to be a community development worker on the estate. I’ve been involved in everything. You’ve got to fight for everything, and I’m still a fighter. Rights are being taken away from people. We’ve had everything thrown at us. One reason I want to get elected is so I can fight this estate’s corner.’

‘I was a member of the Labour Party for 20 years. But because l questioned the New Labour procedures they tried to isolate me. I wasn’t going to pay for membership of a party that abused me. There’s a hell of a lot of things wrong with the Labour Party. I think Tony Blair is Margaret Thatcher’s baby. In the ward I live in two Labour Party councillors don’t want to stand again because they’re so fed up. The Socialist Alliance is doing now what people believed Labour was about in the past-standing up for ordinary men and women in the street. I have been a youth and community worker in Haringey, and have been active in the black community for 25 years. I want to know what the future is for young people. Education in the borough has gone below standard since it was sold off to private companies. I am standing to save services in this area and fight racism.’

‘We have terrific pressure from developers on local residential community areas. All our open spaces seem to be under threat. Economic cleansing is happening here. Some flats are being rented for £4,000 to £6,000 a month. The military are asking for more money for the present adventures-the priorities are all wrong. I’m involved in a group that campaigns against the pollution caused by the local bus garage. When I told them that I was standing as a Socialist Alliance candidate I got a really good response. One of them volunteered to help leaflet and campaign.’

Get involved to back these policies 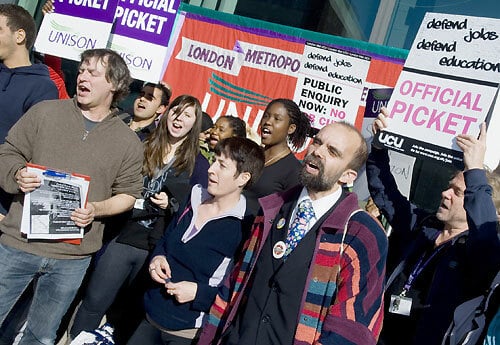 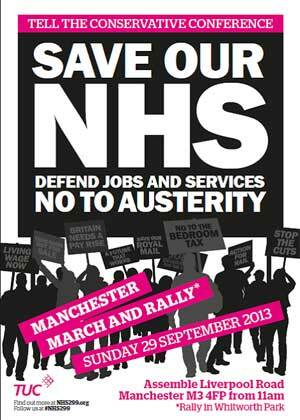 Target the Tory party conference to defend the NHS