‘Wake up on pension crisis’ warns the TUC

ANGER OVER lousy pay and vanishing pensions is causing rising tension between the government and leaders of Britain’s biggest unions. Civil servants are locked in a growing confrontation, local government workers are moving towards possible strikes and the Trades Union Congress (TUC) has called a national demonstration over pensions next month.

It may be less dramatic than what is happening in Iraq, but it is cracking support for Labour among the union leaders. Most of them are keen to work in “partnership” with the government. But ministers seem determined to make no concessions. Brendan Barber, head of the TUC, is not a man who likes talking about strikes. Yet the government’s pension policy has pushed him over the edge.

In a speech last week he said, “We have already seen industrial action. If more attempts to cut pensions are made, the inevitable result will be further action.”

Labour has allowed the state pension to fall below poverty levels to just £79.60 a week for a single person. At the same time Gordon Brown wants NHS workers, civil servants, local government workers, teachers and others in the public sector to work an extra five years before they claim their pension.

And the government has stood by while employers close “final salary” schemes linked to people’s earnings, replacing them with cut-price, risky schemes dependent on the stockmarket. Union pressure forced the government to set up a fund last week for people who have lost their pensions when firms have gone bankrupt. But this affects just 60,000 people.

Speaking at the National Association of Pension Funds conference last week, Barber said, “People feel let down, betrayed and angry at the retreat from good pensions.

“Staff no longer meekly accept a cut in their pension rights. They understand the pension is part of their pay packet.” He conceded the unions had seen pensions as “dull”, but said, “Pensions have shot up our agenda not because they have suddenly become of interest to activists, but because they are a top concern for people at work.

“One in four final salary schemes closed in 2003. Probably half the UK’s biggest employers with salary-related schemes have closed them to new entrants. “Companies repeat the words ‘People are our greatest asset’, yet the very same companies are stripping away retirement security.”

Barber added, “Growing sections of the workforce do not have anything like the pension savings they will need for even a decent retirement.” He asked, “How can young people, burdened with student debt and the astronomic cost of property, put aside 15 percent of their income as the experts advise? “That is why we talk of a growing pensions crisis.”

He said the TUC wants the national march and rally in London on 19 June to be “a national wake-up call”. Barber is obviously serious about creating a stir over the issue.

But he also said, “Of course, unions will always be willing to negotiate to save a pension scheme. “We understand there can be difficulties. Throughout the country, staff have agreed to make sacrifices.”

That sounds like a signal he is prepared to see bosses rob more from workers’ pay packets so long as they consent to steal a little less from pensions. The demonstration on 19 June needs to become a springboard for the sort of strikes that even Barber senses are possible.

It should begin the agitation for the mass strikes over pensions that most European countries have seen over the past five years.

LEADERS of the four biggest unions, Unison, Amicus, the GMB and the TGWU, plus heads of several smaller unions, held a summit meeting this week. The get-together was called to discuss policy for Labour’s election manifesto. But there is no escaping the growing confrontation. Unison, Britain’s biggest union, is locked in three major battles:

1.5 million local government workers in the Unison, GMB and TGWU unions are moving towards strikes because the councils (backed by the government) refuse to improve a pay offer.

Health workers in Unison and the TGWU have turned against the “Agenda for Change” pay and conditions package in the hospitals.

NHS workers whose jobs have been hived off to contractors frequently remain on much worse conditions than NHS staff. Unison thought it had a deal to end this scandal, but the government has not delivered.

At the same time the PCS civil servants’ union is battling over pay, the firefighters have restarted their pay fight, the Scottish nursery nurses refuse to cave in, and there are strike ballots on the rail and the London Underground. The union leaders will be as aware as anyone of the heightened political atmosphere caused by the war and the sense that a “post-Blair” era is approaching.

However, they are torn between the need to take on the government and a fear of encouraging forces to the left of Labour, like Respect and the Scottish Socialist Party.

So TGWU leader Tony Woodley told BBC Radio 4’s Today programme, “A year ago we had a fall-out. We believed our government listened more to big business than its traditional supporters.”

Now, he said, there were two objectives-“to keep the Conservatives out of power” and “a Labour Party in power with a manifesto that motivates the voters”. At crunch moments-as with the firefighters last year-union leaders can sabotage struggles in order to please Labour.

But at other points the government’s intransigence or rank and file pressure can force even the most loyal union leader to fight. Some union leaders may even feel it is necessary to fight the government in order to show that continuing to fund Labour does not mean they are in Blair’s pocket.

It means there are big opportunities for activists to raise the level of resistance and develop rank and file networks. 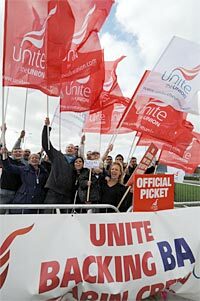 March for jobs in Birmingham on 16 May