‘We are striking to keep the NHS public’

“Hundreds of Unison members in NHS Logistics have taken part in a national strike to oppose the sell-off of essential public services to DHL – a German parcel courier.

NHS Logistics is a multi award winning service, supplying everything from food to bandages.

We are a not for profit agency, handing back an average of £3 ­million a year – money which goes to pay for frontline services.

Why is Mr Blair handing a company that works so well to private sector leeches? It seems like Blair wants to privatise the whole ­

NHS – that’s another reason why he should go.

However, I don’t see Gordon Brown as the answer. Last ­weekend Brown floated the idea of an independent board to run the NHS. Who’s going to be on the board? People like DHL?

Many of those who are striking at NHS Logistics were Labour supporters. Some are Labour members who have talked about cutting their membership cards up. I’m not sure anyone there is going to support ­Labour anymore.

We are just a small bunch of workers. But many others are facing similar battles. People have heard about our dispute through the press and are supporting us. Our stand is helping to wake people up.

I would say to other workers ­facing this – don’t roll over and take it. I think more people should make a stand. The support is out there, not just in my union, Unison, but in all the unions.

When I spoke from the stage at the Stop the War demonstration in Manchester I made the link between war and privatisation.

It’s costing us £3 million a day to wage an illegal war. If they can find money for that, why are they shutting down accident and emergency wards and whole hospitals around the country?

I say bring the troops back home and fill the holes in the NHS.” 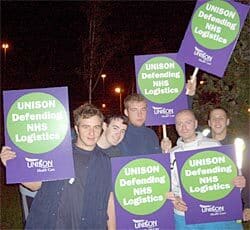