Chanting “No justice, no peace” at the opening rally of Marxism (Picture: Guy Smallman)

A new mood of resistance ran through the over 800-strong opening rally of Marxism Festival 2022 in east London on Friday night. The three-day political festival, hosted by the Socialist Workers Party (SWP) at Queen Mary University, is the first in-person Marxism in three years. Speakers at the event include former Labour leader Jeremy Corbyn, former Greek finance minister Yanis Varoufakis and rapper and activist Lowkey.

The opening rally followed a series of meetings during the day. Topics included Capitalism’s crimes against nature with author Jeff Sparrow, resisting the war on trans people, the legacy of Black Lives Matter and Rosa Luxemburg. And, in the Culture Tent hosted by Bookmarks bookshop, people heard journalist Gary Younge in conversation with Esme Choonara on race, class and identity.

The rally kicked off with inspiring speeches from strikers, including a striking Churchill train cleaner, a Tube striker and a Coventry bin worker. Bella, an RMT member and Churchill cleaner striker, said, “The company says its ethos is doing the right thing. They’re doing the right thing by themselves, certainly not by their workforce

“We are super-exploited workers. We have been for a long time. We are now standing up and standing together to fight for what is ours. Why should my colleagues work full time to sleep at a shelter at night time?

“I’ve learnt a lot from joining the RMT—a lot they don’t teach you in school. I’ve learnt that together we can achieve anything.” The rally broke out into chants of, “The workers united will never be defeated.”

Jane, an RMT member and Tube worker, said, “We are being asked to pay for a crisis not of our making by the very people that are profiting from the crisis. Neither public support or the media will win this struggle. It will be the fight back by workers using their industrial power. This is a fight for the dignity of all workers.”

Haydn Jones, Unite union convenor of HGV drivers in Coventry, slammed the Labour council’s treatment of the strikers. “There’s no way we’re going to be knocked around and called liars,” he said. “We are determined and we will go on.

“I’m hoping now we have not just a summer of discontent, but a whole year so we can bring these Tories down.”

He added, “Look what they’ve done to us in Coventry—is Labour the answer? What are we going to replace the Conservatives with? I’ll never vote for Labour again—I only have hatred and contempt for them.”

But alongside signs of resistance, the Tories and bosses are still launching huge assaults. Across the world capitalism is in crisis—from climate catastrophe to nuclear war, economic stagnation and an ever-deepening cost of living crisis. The system’s centrist defenders offer no solutions to working class people, and the fascists, far right and bigots hope to gain.

The US Supreme Court overturning Roe v Wade was just the beginning in the right’s war on the gains the women’s, LGBT+ and anti-racist movements have won.

Virginia Rodino, a US abortion rights campaigner, said, that the Democrats were unable and unwilling to take on the attacks. She argued they “absorb and de-radicalise movements, not bring the change that we need.”

“Reproductive rights are simply a class issue,” said Virginia. “We need to take it out of that hands of corporations, judges, and politicians. Workers are poised to take this on. We need each other.”

In Britain, the Tories are ramping up racism against migrants and refugees with the Nationality and Borders Act and Rwanda deportation plan. Tandrina, an anti-racist activist in Greater Manchester, slammed the Tories’ “hostile environment” to migrants, and the new laws. “It’s time to question who benefits from these policies,” she said. “The Tories brought the hostile environment upon us. It needs to be challenged and needs to be overturned.”

She said the government is “aggressively blaming migrants for shortages in everything—jobs, housing, healthcare.” And she explained how “division is created by the ruling class”. “I want to see more demonstrations, more strikes and demands for action,” she said. Chants of, “Say it loud, say it clear, refugees are welcome here,” erupted after she concluded.

Jake Bowers, a Romani journalist and organiser of Drive 2 Survive, asked,“What kind of country is it where you have to apply for the right to protest? The fact they’re clamping down so hard shows we’re powerful and must continue to be powerful.”

Jake called on the rally to join GRT protests outside parliament during its reopening in the autumn to “reclaim” it. The bill is a “direct racist attack”, he added. “It’s there to chill and frighten people. But we’re still travelling, stopping and claiming our place on the British landscape for survival. We’re still trespassing on the ground with intent to reside—because there’s nowhere else for us to be.”

Aamer Anwar—solicitor of the family of Sheku Bayoh who died after contact with the police—spoke about their fight for justice. “His family has refused to be silenced,” he said. “They’re asking for the truth—without the truth there can be no justice.”  An inquiry into Sheku’s death began in Edinburgh on 10 May

“When black men die in police custody they are dehumanised and stereotyped,” Aamer added. “Why is it that a black man is always responsible for his own death in police custody? Four years of trusting the system has given lies and no justice. Sheku had no machete and no knife. He was unarmed.” People chanted, “No justice. No peace.”

Lewis Nielsen from the SWP central committee said the festival is urgent because the ruling class “are coming for every gain we ever made”. “Across the board bosses try to make us pay for their crises,” he said. “First it was austerity, then it was the pandemic now it’s inflation.”

And speaking about the recent strikes, he said, “If these groups of workers win, every worker can win. We’ve got to make sure the RMT isn’t a one-off.”  “The same bosses who attack our pay and living standards are the same people who pour fuel on the fire while our planet burns,” he added. “To win that different world, we’re not going to settle for the least worst option. Real change in society comes from below.”

Marxism Festival continues over the weekend. On Saturday Egyptian revolutionary Hossam el-Hamalawy and Sudanese revolutionary Muzan Alneel will join a book launch of Anne Alexander’s Crisis and Revolt in the Middle East and North Africa. And the following morning Lowkey and anti-Zionist historian Ilan Pappe will join a panel on the struggle for Palestinian liberation.

It’s not too late to book a ticket and join the debates on Saturday and Sunday. For a full timetable, click here. 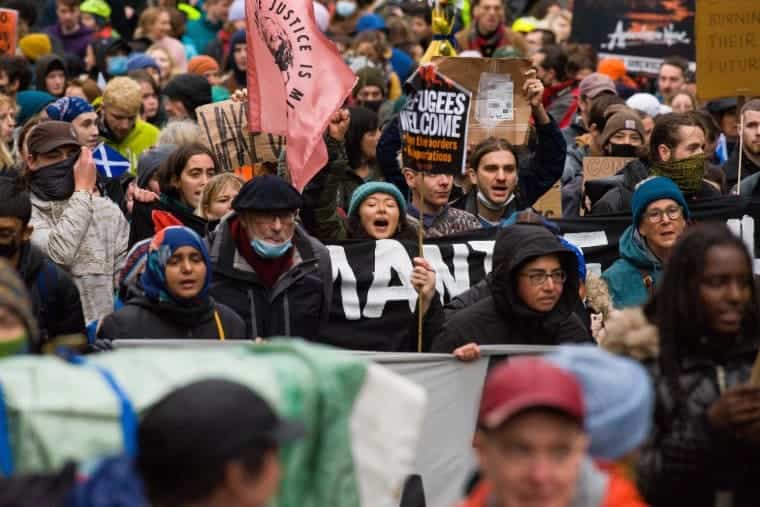 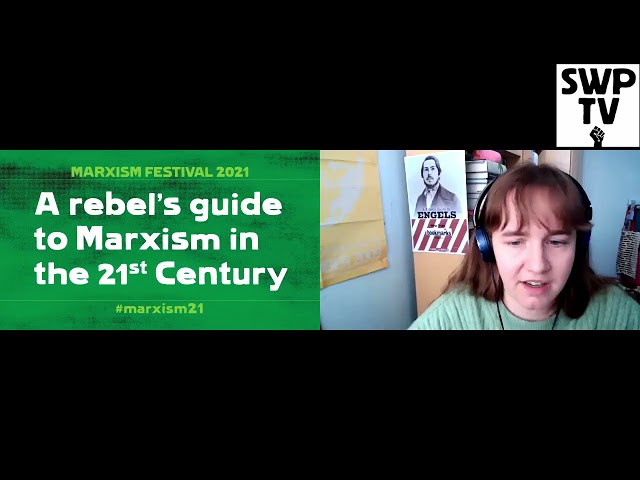