‘We have had a rendezvous with history’

‘THERE ARE 300,000 on this demonstration. Three quarters of central London has been brought to a standstill.’ That announcement from Lindsey German, convenor of the Stop the War Coalition, brought whoops and cheers from the packed rally in Trafalgar Square.

Tens of thousands could not get into the square to hear the speakers. Lindsey went on, ‘George Bush and Tony Blair told us they respect our right to demonstrate. But the White House wanted the whole of central London and the tube system closed off. We have confined Bush to house arrest in Buckingham Palace.

There have been no cheering crowds, no state processions. That’s the power of the movement. The streets of London are ours, not George Bush’s. Bush and Blair have said British and US troops will stay in Iraq as long as they think it’s right. But it’s up to the Iraqi people to decide when it’s right, and they have made it clear they don’t want the British and the Americans. We are in solidarity with the people of Iraq and Palestine, and all those oppressed around the world.

The movement can’t be ignored. We have made history. Our movement is going on, and Bush and Blair had better not forget it.’

Jeremy Corbyn MP argued it was right to protest: ‘There has been tragedy in Istanbul today, with many injured and dead. Thousands have died in Iraq and Afghanistan, and the list goes on.

What’s the response of George Bush and Tony Blair? ‘We will go anywhere, any place, anytime, to fight any war to win the peace.’ I heard Presidents Kennedy and Johnson say that in the 1960s, and that led to the carnage of Vietnam. Jack Straw told us this demonstration was about crude anti-Americanism. But there are many Americans here. We are with the Americans who forced the US out of Vietnam, the Americans of the civil rights movement.’

Paul Mackney, leader of the Natfhe lecturers’ union, showed the continuing commitment by trade unions to the anti-war movement. He said, ‘Tony Blair, I hope you are listening, because the Stop the War Coalition is still here and we are not going away. We salute those who are opposed to war, especially the school students. They have shown hope for the future, for a better world. We have to get our unions committed to this, and build the resistance.’

Ron Kovic is the Vietnam War veteran whose life story was told in the film Born on the Fourth of July. He got a rousing welcome from the crowd for his impassioned speech: ‘I send greetings from the millions in the US who oppose this war and oppose the US president,’ he said.

‘Together we have a rendezvous with history. We can stop war. There are going to be sweeping changes in these countries-regime change in the US and Britain. Things will never be the same again. You were born to change society.’ He then led the countdown to the toppling of a statue of George Bush.

Need for a political alternative

MANY OF those marching were looking for a political alternative to Blair’s warmongering party. George Galloway, the MP expelled for his anti-war stance, took up this issue, saying, ‘Bush and Blair have said it is business as usual. But if we carry on taking an eye for an eye it will leave the whole world blind. We speak for the majority in this country and around the world when we say god bless the people of America, god damn George W Bush. We want to send a message that in next year’s European elections we want to unite all the forces represented here today in a great movement:

‘The peace movement, the trade unions, the Muslim community-all those who are disinherited and disenfranchised and don’t have a voice. We want to drive more nails into the political coffin of Tony Blair.’

The socialist film-maker Ken Loach is one of those who joined Galloway at a meeting last month in London calling for a new left wing coalition to be set up. Loach was filmed by Channel 4 News on the march, saying, ‘There is a real question of political representation. Who is speaking for all these people and their ideas?’ 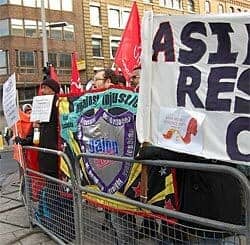