This article is over 9 years, 7 months old
Over 100 oil refinery workers took to the streets of London today (Wednesday) in a protest against plans to throw them out of work.
By Dave Sewell
Downloading PDF. Please wait...
Thursday 14 June 2012

Over 100 oil refinery workers took to the streets of London today (Wednesday) in a protest against plans to throw them out of work.

Demonstrators from the troubled Coryton oil refinery, near Basildon in Essex, had been promised a secure future under a new owner after the business ran into difficulties.

But administrators Price Waterhouse Cooper now say the plant will close with the loss of almost all jobs.

“The whole community will be devastated if Coryton closes. Already people are talking about selling their houses and leaving,” said Tony, who works in the refinery control room.

“We’re being left with nothing. For some people it’s just a month’s pay. The administrators have kept us in the dark every step of the way.”

“They assured us we were still a going concern. Just a week before they announced the closure they were using language like ‘in the unlikely event of redundancy’,” he said.

Price Waterhouse Cooper plans to sell the refinery to Shell. They will then convert it into a terminal for importing oil with a much smaller workforce. Coryton protesters today targeted the oil giant’s London headquarters.

“Shell want to profit from our job losses,” said Jason. “Coryton is a viable site, and it should continue to run.”

The workers, who are members of the Unite union, also protested outside the department for energy and climate change, and outside the Leveson inquiry in the hope of confronting David Cameron.

Some protesters had come straight off a 12 hour shift at the refinery to join the demonstration. They are determined to fight for their jobs, but time is running out.

The first round of redundancies is expected in less than ten days.

Workers are demanding that the government guarantees a loan to keep the refinery going for long enough to find another new buyer.

“The banks got bailed out, so why can’t they bail us out?” asked process operator Nick. 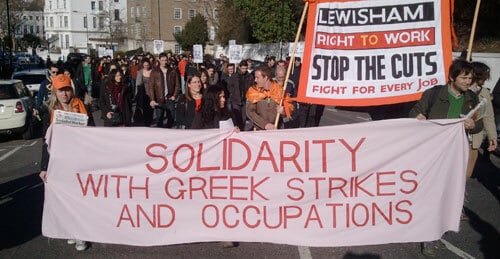