Firefighters struck across England and Wales on Wednesday of last week. The Tories want to force them to work until they’re 60 or face savage cuts to their pensions. The four-hour walkout was the first action by workers’ FBU union to stop the attack.

Neale Williams, chair of Dowgate FBU branch in south London, described the action as a “morale lift”. At picket line after picket line, supporters brought banners, food and solidarity to strikers. Supporters from the PCS union joined around 300 firefighters in Cardiff for a march on the Welsh Assembly.

Edd Rodgers was striking at Aikman Avenue fire station in Leicester. He told Socialist Worker, “We know we have the arguments on our side and we know the public support us. “The new proposals aren’t realistic. You can’t have 60 year old firefighters.”

As central London FBU member Tim Marchant told Socialist Worker, “What I hate is the hypocrisy. MPs claim for everything. “The government is just ignoring us—so we’re making a stand.”

In Surrey, fire bosses said they would withhold firefighters’ pay for the whole nine-hour shift. Neale said, “It’s outrageous. But people are saying, if they’re going to dock our pay for a whole day then we should escalate the strikes to at least a whole day.”

Picketing gave firefighters a chance to discuss the next steps in the dispute. Simon Hickman is an FBU rep in Manchester. “The mood was really upbeat,” he said. “Hopefully it will give our union leadership the confidence to call more action.” Simon Chapman is the FBU rep for Southwark in south London.

“I personally think the union should be escalating,” he told Socialist Worker. “I think FBU members are up for a fight.” Neale added, “Everyone saw the strike as just the start. We have to escalate—and we want Scotland out as well.”

The FBU is negotiating with the Scottish government and Scottish firefighters didn’t strike last week. The government has suggested that firefighters who are unfit to work before they are 60 could be moved to less physically demanding roles. But the FBU says these roles don’t exist on anything like the scale required.

The government’s Williams Report estimated that, in the worst case scenario, 85 percent of firefighters would be unfit to work at 55. The Tory plans are a straightforward raid on firefighters’ pensions—and the whole union should stand together to smash them. 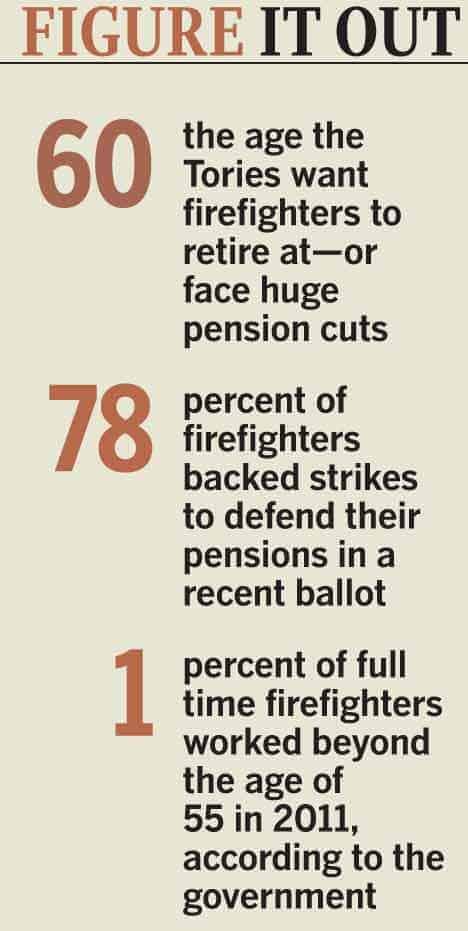 Around 100 London Underground drivers refused to take trains out because of safety concerns during the firefighters’ strike.

He told Socialist Worker, “The action has affected the Piccadilly, Victoria and Hammersmith & City lines in particular.

“It will go on throughout the firefighters’ strike and it will impact on services.

“During the Kings Cross fire in 1987, and during fires ever since, firefighters have risked their lives to save passengers and staff on London Underground.

“We don’t see why people doing a socially useful job should be attacked. I fully support firefighters’ right to retire at 55 on a full pension after a lifetime of heroism.”

Groups of workers visited picket lines across England and Wales to support the strikes.

In Manchester, workers from the Hovis factory in Wigan visited pickets. They scored a victory against their bosses last week. 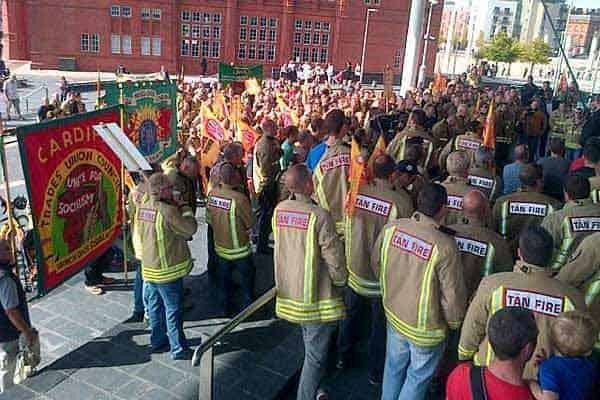