‘This looks like divide and rule to me. Unison should be working across the whole public sector — with Unison members in health and local government — and uniting with other public sector unions such as the PCS.

Building that unity is the main question for activists like myself. We need joint union rallies over pensions and a serious campaign among rank and file members.

Workers, including those who have not been the most active union members in the past, are really passionate about this issue.

We need to put pressure on people who are negotiating on our behalf and we can have no illusions that the government will deliver for us without a serious fight.’

‘If health workers sign off this deal without seeing our brothers and sisters in local government right, then this agreement will return to haunt us.

For the battles ahead against privatisation and the destruction of the NHS we need the broadest unity of working people — not a legacy of division and recrimination.

It’s simple. Our union needs to do what it says on the tin — act in Unison.’

‘I went round a ward and easily filled 12 sheets of a petition calling on the union leaders not to sell our children’s pensions.

I felt proud of the solidarity between generations. People were pleased about their own situation, but angry that our children get such a rough deal—over tuition fees, low pay and now pensions.

There was a strong feeling that unions exist to defend everyone, and that this is a short sighted deal.

One person felt, with all Blair’s attacks, this might be the best we could do. But after a discussion about the possibility of a fightback, she changed her mind.’ 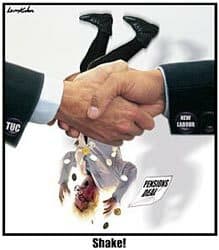 Pensions deal has let millions of workers down