Campaigners across Britain are organising for the important Defend Council Housing (DCH) lobby of parliament on Wednesday 8 February.

“Whether you have a privatisation ballot coming up, have already won your ballot or even if your estate has been transferred to an Almo (arms length management organisation), this is a real opportunity to show opposition to Tony Blair’s housing policy.” says DCH chair Alan Walter.

Luke Henderson from Edinburgh was involved in the victory against the council’s plan to take 23,000 homes from council control. He told Socialist Worker, “We stopped the attack, but they could try again.

“On 8 February it is vital that housing campaigners from around the country go to London. My Unison branch has agreed to pay for two tenants and two delegates from the union, despite the leadership wanting to lobby the Scottish parliamentary instead.

“The government has a national plan to sell off council homes. We need to fight back on a national level, and that means getting a significant number of people to the lobby.”

There will also be meetings during the day so that activists can come together in order to share ideas and create a united national campaign.

Tenants whose homes are currently under the control of an Almo are facing new attacks. DCH has always maintained that Almos were two-stage privatisation. New plans emphasise the threat. They mean:

Alan Walter adds, “To build the lobby, mail tenants’ organisations and trade unions, and put leaflets in councillors’ pigeon holes to build a broad delegation. Write to the local press inviting tenants to join a delegation to meet local MPs.”

For details go to www.defendcouncilhousing.org.uk 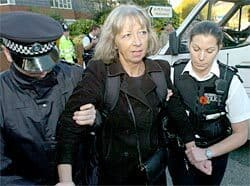