Vauxhall Iis owned by the multinational GM. GM is the world’s biggest industrial corporation. It made £130,000 million profit last year.

It employs 388,000 workers in 64 different countries across the globe. It is bigger than the national economies of countries like Turkey and Indonesia. But GM wants more. It wants higher profits, so it plans to close the Luton plant, slashing over 2,000 jobs. It will bring despair to a town the media says is part of the ‘prosperous’ south east.

Mass meetings at the plant on Tuesday heard union officials report that GM would not budge from its decision at a meeting in Europe on Monday. Vauxhall workers in both Luton and Ellesmere Port are to ballot for strike action.

They plan a Europe-wide day of action against GM on 25 January, as well as Saturday’s demonstration in Luton. ‘Our officials have told us GM plants across Europe will not be working next week on 25 January. If that is so, it will be historic,’ says a TGWU shop steward at the plant.

‘Other workers will be striking to save our plant, and against the right of multinationals to use people and abuse people at will. We have no other choice. This is how we have to fight globalisation.’ Shop stewards got a brilliant response from local people at the stalls they organised around Luton town centre last weekend to build for Saturday’s demonstration.

Workers from other car plants are planning to join that march. At the start of this week three coaches were booked from Vauxhall Ellesmere Port, another three from Longbridge in Birmingham, a coach from Land Rover in Solihull, and a joint Peugeot/Jaguar workers’ coach was planned from Coventry. Trade unionists everywhere should take delegations to Luton on Saturday.

The South East Region of the TUC plans transport, leaving from TUC headquarters in London at 9.30am on Saturday. Phone 020 7467 1220 to book.

‘There is a good mood to fight this-there is no doubt about that. Workers at Opel in Europe, owned by GM, are supporting the stay away on 25 January. That’s brilliant. But we want it to be worldwide. It would be the first time in history there’s been a worldwide strike against a multinational, but why not? People are the same all over the world. We’ve all got mouths to feed. This is how we have got to fight these days. No one company should have as much power as General Motors. They have more power than whole countries. They tell governments what to do, not the other way around. They’ve got to be stopped.’
Vauxhall worker, Luton

Steel workers across Britain are waiting anxiously to hear which jobs will be slashed by their Corus bosses. In the next few weeks Corus chairman Sir Brian Moffat will announce thousands more job losses. Many people believe a plant will close, with Llanwern near Newport as the likely target.

The ISTC union has started a strike ballot at Scunthorpe over the way redundancies are being made. But union leaders postponed a mass meeting to launch a ballot at Teesside because they were ‘heartened’ by talks with the company.

Such signs of weakness simply encourage Corus to cut more. Sir Brian Moffat is famous for saying, ‘I am interested in making money, not steel.’ Union leaders should be pressured to campaign for a national strike against the job cuts.

Corus was formed after British Steel and Dutch firm Hoogovens merged. Dutch workers have pledged support for any fight in Britain. ‘We know what job losses mean to families and communities. We cannot stand aside and let this happen to our British colleagues,’ says Gerret Idema, branch chair of the FNV union at the IJmuiden plant.

Engineering firm Sandvik announced last week that around 250 jobs will go with the closure in August of two steel production plants at Chesterfield and Walsall.

BAE Systems, Britain’s largest defence and aerospace group, announced plans last week to cut at least 2,000 jobs. Most of the jobs will go at the Brough plant near Hull.

Food firm Faccenda axed 500 jobs last week with the closure of a Webbs Country Foods plant in Lymington, Hampshire. The company has opposed moves towards unionisation, claiming there was no need for collective negotiations.

Barclays bank has announced 750 jobs will go with the closure of its life insurance section. 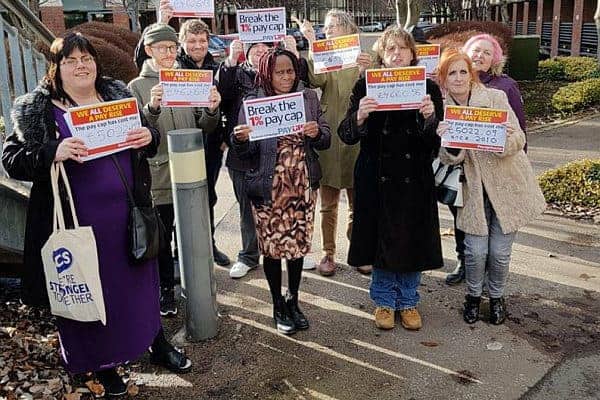 NUT leader calls for teachers to join May Day events