New Labour loves up to bosses…

A HUGE battle broke out in the post this week as tens of thousands of workers struck unofficially. As Socialist Worker went to press on Tuesday a national postal strike was beginning. The strike has given a glimpse of the immense bitterness and anger that millions of workers feel. The cry was similar in offices across Britain: “We’ve had enough” of long hours, flexible working, bullying managers, privatisation…

The revolt came as Royal Mail managers, backed by the government, launched a major offensive to “soften up” workers for privatisation. The strikes began in the north west of England, where workers refused to do the work of colleagues in Watford who were on official strike. “They came to us for a fight and they certainly got it,” a Liverpool CWU union member told Socialist Worker. “We are going to make them wish they had never started.”

At office after office the message was the same:

Royal Mail managers calculated last week that Blair and the rest of the main parties would compete to condemn strikers during the election period. By Tuesday afternoon the roll call of offices on strike or sitting in and not working included Liverpool, Stockport, Preston, Bolton, Manchester, Watford, south west London, East London Mail Centre, NDO and Chester.

Elsewhere there were signs that some local managers were getting cold feet. The push for strikes came from below. Union leaders repudiated the action and alternately pleaded and instructed strikers to return. Quite rightly the rank and file told them to piss off. A Chester CWU union member told Socialist Worker, “In this election workers’ concerns have been largely ignored. Our strikes have shown who really matters in Britain.”

It is up to every socialist, every trade unionist and every campaigner to make sure the postal workers do not stand alone.

It’s right to strike back 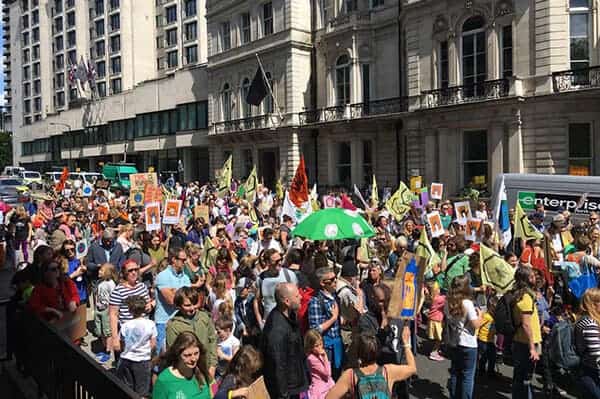