This article is over 18 years, 11 months old
THE BIGGEST political meeting in the town I can remember in 30 years-and the first when we've had to turn people away.' That was how local activist Jane Hardy described the Stop the War Coalition public meeting in St Albans last Thursday, as 350 people packed into a school hall.
Downloading PDF. Please wait...
Saturday 01 February 2003

THE BIGGEST political meeting in the town I can remember in 30 years-and the first when we’ve had to turn people away.’ That was how local activist Jane Hardy described the Stop the War Coalition public meeting in St Albans last Thursday, as 350 people packed into a school hall.

Fellow St Albans activist Neil Faulkner reports that people ‘overflowed onto stage, aisles and stairways, while 100 more left outside held impromptu debates’. Brockley, in south east London, also saw the biggest political meeting anyone could remember last week, as over 600 people rallied in opposition to war. There too the room was packed to overflowing. Every seat was taken-people sat on the floor, and jammed into every available space.

What made the turnout even more astonishing was that everyone had paid to come in, with the meeting also aimed at raising funds for the leaflets and posters to build the 15 February anti-war demo.

Further north, York also saw ‘its largest political meeting in decades, and the birth of a genuine mass movement in the city’, reports local anti-war activist Frank Ormston. Over 450 people packed into the meeting. Already ten coaches from York are booked for the 15 February anti-war demo-compared with three coaches which travelled from the city for the 400,000-strong anti-war demo last September.

This trio of meetings is not unusual or exceptional. In every corner of Britain, in cities, towns and villages people are rallying, determined to act to stop Blair backing Bush’s war.

Many of the meetings have seen delegations arriving from local workplaces too, giving a sense of how the movement can spread to factories and offices, as well as down to street and estate level.

In York there were delegations of council workers, firefighters and rail workers at the meeting, along with large numbers of students from the city’s university. At the Brockley meeting in south east London many came in groups from local workplaces.

Anna O’Brien was with fellow teachers from Crofton secondary school. ‘There are 15 of us here tonight, about a fifth of all the teaching staff in the school,’ she told Socialist Worker.

‘We hope to go to the 15 February demonstration as a big delegation from the school now, with people bringing their families and friends.’ Glenn Clark, a firefighter from Deptford station taking part in the national strike that day, also addressed the meeting. Afterwards he told Socialist Worker how, ‘On my station I would say about 80 percent of people are now against the war. You do get arguments, but when you explain the issues about the war you can convince people. We hope to get a good turnout for 15 February.’

Many other people came to the meeting as individuals, but were determined to do what they could to build the anti-war movement. Paul Summers works as a driving instructor for the AA: ‘I came here because I think we can and must stop this war. I was part of the anti poll tax movement and we beat Thatcher, and we can beat Blair now. I talk to people I teach about the war, about 15 February. Nobody seems to be in favour of war. But we have to convince people they have to protest if we want to stop it.’

Many places have seen impressive outdoor rallies or protest marches against the war. In Nottingham last Saturday some 500 people turned up for a rally, reports local activist John Shemeld. Sarah Piggot reports that ‘500 people braved driving rain on Saturday to take part in an anti-war demonstration in Colchester’.

And from Norwich Trevor Phillips reports that ‘700 or 800 anti-war protesters brought shopping streets to a standstill here last Saturday. Giant puppets bearing the faces of war victims-features of innocent Arab men and women who might be victims of a war on Iraq-were carried amid a lengthy street procession. The event was loud and musical, with people of all ages and appearances.’

The anti-war movement is galvanising people everywhere, with many towns sending coaches to a London demo for the first time ever. Lizi Allnatt from Exeter reports a ‘truly astonishing response from the towns and villages of Devon.

‘As well as our four coaches from Exeter already we know of coaches going from Crediton, Barnstaple, Exmouth, Bideford, Newton Abbot, Totnes, Instow and possibly Chagford. We are hearing of more coaches being booked every day, and we still have two weeks to go before the march!’

In major cities the movement is spreading down from city-wide rallies to meetings in local areas or in satellite towns and suburbs. Angela Shann reports how ’60 people turned up to the Sharrow Stop the War Coalition meeting in Sheffield this week to watch the Not In My Name video and discuss building the anti-war movement in the ward.

‘Sharrow is a multi-ethnic inner city area, which the meeting reflected with many people from the Muslim community attending. The meeting made a number of practical plans such as doing a weekly stall at a local mosque, making a banner, organising coaches to the 15 February demo and lobbying our pro-war MP, Richard Cabourn.’

Paul Sillett reports that ‘over 100 people attended a public meeting on the war on Iraq in Ormskirk, near Liverpool, last Friday. ‘Anti-war campaigners are now hoping to take a coach from Ormskirk to the 15 February demo.’

The anti-war message was also carried to parliament last week, when hundreds of people queued to lobby their MPs on Tuesday. 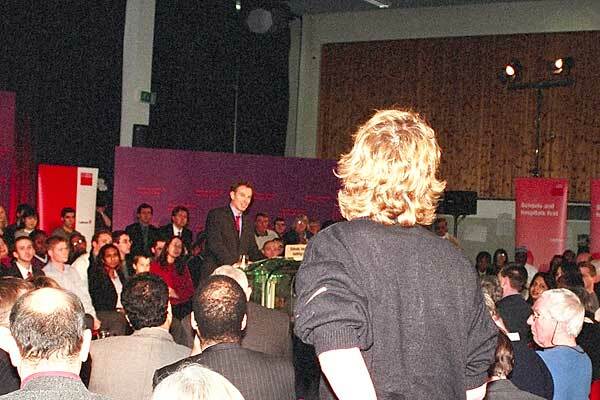 'People are mobilising in every area of our city'