We will fight for council housing

This article is over 18 years, 11 months old
AROUND 1,800 council tenants and trade unionists descended on parliament from across Britain last week. The lobby and accompanying rally had been called by the Defend Council Housing organisation, which is at the heart of the fight to stop New Labour privatising council housing.
By Paul McGarr
Downloading PDF. Please wait...
Saturday 08 February 2003

AROUND 1,800 council tenants and trade unionists descended on parliament from across Britain last week. The lobby and accompanying rally had been called by the Defend Council Housing organisation, which is at the heart of the fight to stop New Labour privatising council housing.

The protest was also backed by tenants’ federations around the country, and key national trade unions including Unison, Ucatt, the TGWU and the GMB. A growing number of local councillors and MPs are throwing their weight behind the campaign. Over 100 MPs have signed a parliamentary motion backing the key demands of the campaign.

Labour MP Austin Mitchell opened the rally, on Wednesday of last week in Westminster’s Central Hall, with a simple message to the government: ‘Stop this campaign to get rid of council housing.’ Alan Walter of Defend Council Housing told the rally, ‘There are 3.6 million council tenants and lots more people who need council housing.

‘Council housing makes sense. This fight is not just for existing tenants. It’s for our children, for the homeless, for people who thought they were buying a home and all they’ve got is a mortgage to try and keep paying.’ Alan pointed out that the pressure of the campaign, including a string of no votes by tenants in ballots on privatisation, had already seen the government come up with a new scheme.

This involves handing council homes over to a council-controlled company called an ALMO instead of outright privatisation. He warned that ALMOs are a halfway house to privatisation: ‘It’s part of the same privatisation strategy. We must reject it and fight for investment in council homes without strings.’

Jack Dromey, TGWU national organiser, argued, ‘The government wants to privatise the bulk of the council housing stock. It’s wrong. We want proper investment in council housing funded out of taxation.’ He pointed out that the government is prepared to write off hundreds of millions of pounds a year in debts for councils that privatise: ‘If they can do that, why can’t they do the same for tenants who want to stay with councils?’

‘It’s a scandal that we are the fourth richest country in the world while people live in overcrowded accommodation or struggle to find affordable homes,’ said Unison general secretary Dave Prentis.

‘We need to fight for decent, secure, democratically accountable council housing, not as a last resort but for all who need it.’ One of the biggest cheers went to striking firefighters who joined the platform. London firefighter Neale Williams won a standing ovation when he backed the demand for investment in council housing.

‘No firefighter in London can afford to buy a house here,’ he said. ‘Is it too radical to demand that firefighters should be able to live among the communities they serve?’ He won more applause when he argued, ‘This government says it has no money for the firefighters or council housing, yet it has billions to bomb Iraq in a war that nobody wants.’

‘The shortage of teachers, nurses and other public sector workers in many areas of the country is directly linked to the lack of affordable housing,’ said new TUC deputy general secretary Frances O’Grady. The government must invest in council housing.’

Birmingham tenant Frank Chance won an ovation when he talked of last year’s no vote by tenants which sank the plan to privatise the city’s council homes: ‘Our victory was a victory for every tenant and trade unionist who got out on the streets. We don’t want the return of Rachmanism. We want affordable, decent homes.’

The lobby took place as deputy prime minister John Prescott prepared to announce his review of housing finance. Eileen argued that across Britain people should campaign for local councils and councillors to back the demands of the lobby: ‘Get every council to sign up.’ Outside the hall tenants who had travelled from across Britain hurried to lobby their MPs, demanding that they press the government to halt its privatisation drive and instead put public money into council housing.

They felt that the size of the lobby, and the wide backing the campaign was winning, could make a real difference. ‘It was very good coming down here today,’ said Mandy Bailey, a tenant from Banbury Cross in Oxfordshire. We are facing a privatisation ballot and we are campaigning for a no vote. But we are also here because we don’t just want to say no, but make clear to this government what we want instead.’

Get your council or councillor to back the six demands of the lobby. For details go to www.defendcouncilhousing.org.uk or phone 020 7987 9989. 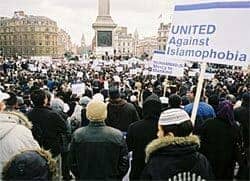 The anger at racist cartoons continues 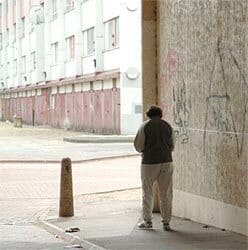 Reject this attack on telecoms workers