We will ‘keep appealing’ against the bedroom tax

This article is over 8 years, 8 months old
By Dave Sewell in Leeds and Bridget Parsons in Birmingham
Downloading PDF. Please wait...
Tuesday 23 April 2013

Around 1,000 people marched through the streets of Leeds on Saturday of last week while hundreds marched in Birmingham against the Tories’ hated bedroom tax.

They included many council and housing association tenants who are already in arrears on their rent thanks to the tax, which came into effect on 1 April. That means people have already lost two weeks’ money, and they are now having to pay out more as council tax benefit has been cut.

In Leeds, Emma from Halifax told Socialist Worker, “We’ve been told my son and daughter have to share a room. But he’s autistic, and if they share then neither of them will sleep.

Emma’s housing association is one of many that says it will evict tenants who go into arrears.

“I’m going to appeal and keep appealing, and keep going to the meetings and protests,” she said.

John Davies, chair of the Hands Off Our Homes campaign, read out a letter from another tenant who has a spare room since her son left home two years ago.

She has received a letter and a note this week warning she is now £31.59 in arrears as a result of the bedroom tax and the council tax benefit cut.

“I am ready to fight and not pay this fee if everybody does the same. However I can not blow against the wind by myself,” she said.

If everyone affected by the bedroom tax appeals it will take many months, and tens of millions of pounds, for landlords to take them all on.

The biggest cheer in Leeds went to tenant Liz Kitching of Hands Off Our Homes, who asked the crowd, “Why does Leeds City Council want me out of my home? Why can’t they turn around and say they won’t do what the Tories say?”

“This won’t be the last protest,” Liz promised. “We need to fight this like we fought the poll tax, until we’ve kicked that monster David Cameron out of office”.

Meanwhile 61 year old Margaret joined some 150 others in Birmingham city centre. She gets just £68 per week in Employment and Support Allowance has had to pay £13.50 a week bedroom tax and £3.80 a week council tax since 1 April.

Margaret is so short of money she can’t afford to buy food.

“I’m having to collect food people leave on tables in Cannon Hill park and pick up fruit left on the floor at markets,” she said.

Rhiannon Lockley, a lecturer and UCU branch secretary at Halesowen college said, “Young people have enough barriers to succeeding in education without this spiteful attack on benefits that threatens to kick them out of their homes.”

People left determined to build the next demonstration as widely as possible across the city.

Protests around the country

Some 200 people marched to a rally in central Manchester. There were banners from tenants groups in Wythenshawe, south Manchester and the Hillock estate in Salford, and from the Unison union.

Around 150 people marched in Cardiff, including delegations from the Unison, Unite, PCS and NUT unions as well as tenants hit by the tax. Protesters shouted at  Nick Clegg, who was in town for the Welsh Liberal Democrat conference.

And a small but determined group of tenants held a meeting last Saturday on the Tulse Hill Estate in Brixton. 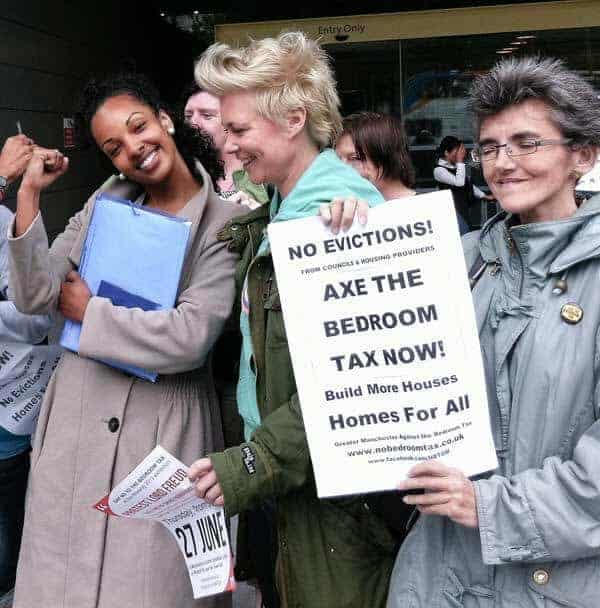