‘We will stand up to racism and fascism on 22 March’

This article is over 8 years, 0 months old
A day of protests against racism is a chance to push back politicians’ lies about immigration, writes Ken Olende
Downloading PDF. Please wait...
Tuesday 14 January 2014

Activists met at the TUC in London this week to prepare for a Stand up to Racism and Fascism rally and demonstration on Saturday 22 March in the capital.

Demonstrations will take place in Cardiff and Glasgow on the same day.

The meeting brought together representatives from Unite Against Fascism (UAF), migrant groups and trade unions including Unison, Unite, PCS, UCU, NUT and the GMB.

TUC race equality officer Wilf Sullivan spoke to Socialist Worker about the importance of the event.

“It can counter the toxic debate that’s out there,” he said. “I keep hearing people complain that they can’t debate migration without being accused of being racist.

“I think it’s important to say that the debate about migration is racist. We want to show that we welcome people. We want a show of unity on 22 March.”

Wilf said that the protest will take place at a critical time. He said, “We will not stand by and let them ramp up racism in the lead up to the European election or next year’s general election.

Aaron Kiely, NUS Black Students’ Officer, was also at the meeting. He told Socialist Worker, “The rise in racism is having a serious impact on campuses. It is having a damaging effect on students.

“Childline has reported a 69 percent increase in people contacting them about online racist bullying in the past year.

“That is linked to what the government is doing and saying about immigration.

“In colleges we’ve seen blacking up, attacks on people wearing the veil and attempts to deport people. It’s important for all students to unite against racism.”

The NUS plans to hold organising meetings in London, the Midlands and the north of England.

Veteran campaigner for Travellers’ rights Grattan Puxon said, “The main targets of the anti-immigrant hysteria are Roma and that’s why we’ll be at the front of organising this protest.

“Two weeks later on 7 April we’ll be launching Roma Nation Day, which we want to be a prelude to action around Europe.

“We think the two protests should complement each other.” He added, “It’s significant that it takes place in Westminster.

“That’s where the council has unleashed a campaign against Roma people sleeping on the ground.

“The poorest pay the highest price and end up being complained about by the richest.”

Blame the bankers, not migrants

Weyman Bennett, joint secretary of Unite Against Fascism, stressed three reasons why the events on 22 March are so important.

He said, “First we have to be in solidarity with the Greek socialists and anti-fascists in Keerfa, who are standing up to Golden Dawn. They originally called for action around Europe.

“Second, here in Britain we have to make sure the fascist MEPs Nick Griffin and Andrew Brons are not re-elected in May.

“Third, socialists have to link workers with people fighting against oppression.

“And it’s happening now. Migrants didn’t cause the crisis. Blame the bankers.

“A vast number of people oppose the virulent racism of Ukip and the Tories. But you wouldn’t know it from the media. We need to change that.” 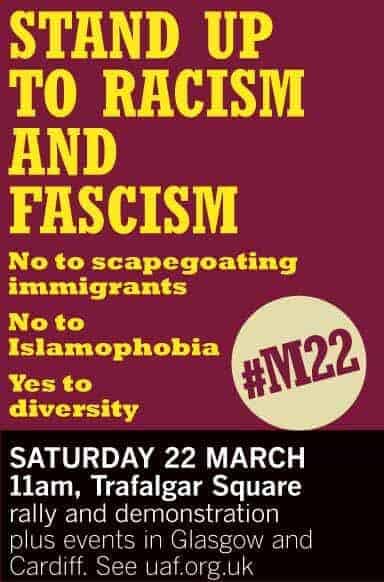