This article is over 17 years, 1 months old
George Galloway’s statement to the senate committee has been "lost" from the senate website.
Downloading PDF. Please wait...
Saturday 28 May 2005

George Galloway’s statement to the senate committee has been “lost” from the senate website.

According to the site Galloway “did not make a statement” to the committee. This conflicts with the evidence of the live televised statement and the question and answer session the Respect MP for Bethnal Green & Bow gave to the investigations committee.

Then there was the massive press and media coverage from every part of the world, which seems to confirm that the MP did actually appear before the committee.

George Galloway said, “ It seems I’ve been airbrushed from history. Senator Norm Coleman, who in a previous incarnation was a left winger, has clearly learned from Uncle Joe Stalin how to remove troublesome people from the historical record.” 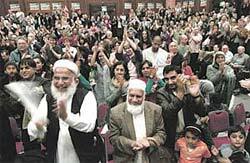 Neo-cons exposed in front of media