Wednesday 30 November – a day to take on the Tories

This article is over 10 years, 4 months old
Wednesday 30 November will see millions of workers strike against the government’s attack on pensions.
By Simon Basketter, at the TUC conference in London
Downloading PDF. Please wait...
Wednesday 14 September 2011

Wednesday 30 November will see millions of workers strike against the government’s attack on pensions.

The TUC has today, Wednesday, named that date as the first day of action in a campaign to stop the Tories’ assault on public sector pensions.

TUC general secretary Brendan Barber said, “Each union has been asked to consider taking what they consider to be the most appropriate form of action possible to show their support for this united campaign.

“This will range from strike action, where ballot mandates have been secured, to lunchtime meetings, rallies and joint events with community groups and service users.

“The intention is to take the call for pensions justice for both public and private sector workers to every corner of the land in the biggest trade union mobilisation in a generation.”

The announcement follows a debate on pensions earlier today at the TUC conference in London, where a number of unions announced strike ballots. 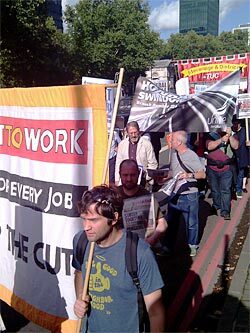 Crisis means the poor suffer the most

Who really gets gold-plated pension pots?