Welcome to Osborne’s Britain: cash for the rich, cuts for the poor

This article is over 9 years, 10 months old
More than 600 public sector jobs have disappeared every single day since the Tories came to office in 2010.
Downloading PDF. Please wait...
Tuesday 20 March 2012

More than 600 public sector jobs have disappeared every single day since the Tories came to office in 2010.

At the same time Tory chancellor George Osborne has slashed corporation tax—which will hand another £1 billion to the bosses over the next three years.

This is the reality of Osborne’s Britain. And this week he will rain down more misery on working class people with yet another bosses’ budget.

Osborne and his gang pretend this is about cutting the deficit. They say that everyone has to make sacrifices.

In reality they are using the economic crisis to fundamentally transform the welfare state and permanently drive down workers’ living standards.

This week the government froze the minimum wage for young workers. They claim this will encourage firms to hire them. But firms are sacking workers, not taking them on.

Freezing the minimum wage simply allows bosses to make even more money at our expense.

The Tories aren’t out to help ordinary people. Their real agenda is to help their rich friends at our expense—and their flimsy rhetoric can’t hide it. 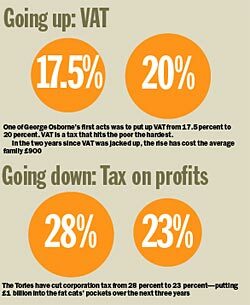 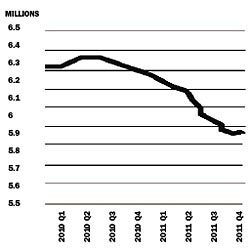 There aren't enough jobs to employ the unemployed