What attitude do socialists take?

What attitude do socialists take?

DURING THE fuel blockades newspapers interviewed scores of haulage owner-operators and small farmers. Many talked about how they had been driven to desperation by high fuel costs.

These small businessmen and the self employed belong to a social group known as the “petty bourgeoisie”, from the French term for “small capitalists”. Typically they are in transport, construction, agriculture and service industries such as trading, shopkeeping, cleaning and so on.

They are a growing group. The Federation of Small Businesses reckons that “in just 20 years the number of small businesses and the self-employed has doubled from 2.5 million to 5 million today.”

The figures exaggerate the growth in the number of the self employed. There are groups of workers such as “lump” building workers, actors and computer “freelancers” who are “self employed” only for tax purposes.

Nevertheless, there has certainly been a growth of small businesses as a result of a deliberate strategy of British capitalism. During the fuel protest we found that the big oil companies often do not have their own drivers. Two thirds of the jobs are subcontracted to smaller firms.

This follows a pattern across industry. Big firms use subcontractors because it means they can avoid the cost of a permanent workforce. They also reckon they will have less trouble from trade union organisation if work is “farmed out”.

Big firms also drive down costs by making small businessmen who bid for subcontracts compete with one another. The privatisation of the welfare state is also boosting the small business sector.

The latest figures from the Department of Trade and Industry show that “most of the growth in the business population between 1998 and 1999 has been in the one to four employee category. Of the 3.7 million businesses in 1999, over 2.3 million were ‘size class zero’ businesses -those made up of sole traders or partners without employees”.

BUSINESSES WITH less than 50 employees make up nearly half of private sector employment. The other half is made up of the 7,000 or so big business operations.

Small businesses are enormously vulnerable to changes in the economy. When recession hits, hundreds of thousands are wrecked. In the early 90s recession around 300,000 businesses went to the wall in two years.

Even today, when the economy is supposed to be in a healthy state, one in ten businesses registered at the start of the year no longer exist 12 months later. But the total number of businesses remains the same at the end of the year. That means there is a massive turmoil as individuals stop trading, become bankrupt, and their competitors move in.

When the system seems to be doing well every small boss dreams of becoming a big boss. This, for instance, is why small businessmen leapt to support Thatcherism when in the 1980s they thought the system was working well for people in their social position.

A study of the 1983 general election found those it classed as petty bourgeois were the strongest advocates of Tory “values”. Six out of ten of them supported privatisation and lower income tax, seven out of ten wanted more anti-union laws, and nearly 80 percent were in favour of private education.

But when the system goes into crisis the petty bourgeoisie can find themselves plunged into despair as they get squeezed. The big firms hope to ride out such crisis. One of the ways they do so is by passing down costs to the small firms.

Suddenly the small businessman’s dreams of future riches of being “his own man” and a cut above the workers can turn to nightmare. The Road Haulage Association claims truckers have profit margins as low as 3 percent.

ONE OWNER-DRIVER on a blockade told the Mail, “I go out to work at 3.30am on Monday and I come back to my wife and kids on Friday night. I live in the cab. I used to be able to afford to park in a proper truck stop, have a wash and buy a meal in a decent canteen before getting some sleep. Now with the price of fuel so high I take a bottle of water, find a lay-by for the night and wash in cold water in the morning. It’s a tramp’s life.”

There are many small shopkeepers and taxi drivers who work long hours and might not clear much more than a skilled worker gets in wages.

But although they can hate big firms and governments that seem not to listen, the small businessmen’s position leads them to fear the organised working class. Individuals may be sympathetic to this and that dispute. During the 1984-5 miners’ strike some small firms donated food and money to the strikers.

Some one-person businesses may be workers who have sunk their redundancy money into setting up a concern, and who carry some kind of working class consciousness with them.

But taking the case of this and that individual does not explain the position of the petty bourgeoisie in capitalist society. They are a group who are caught between the two main classes in society-the ruling class and the working class.

They can hate big business for squeezing their profits, but also the workers for putting forward demands that hit them. Small businessmen are often in terror that their workers are going to want a wage rise or shorter hours.

They resent it when workers combine to strike for higher wages and better conditions. The lorry driver-owners see strikers as a barrier to their profits. They calculate desperately that every day a lorry is not in use it costs them hundreds of pounds.

That is why during the miners’ strike lorry owners drove through the picket lines. A few of these businessmen were caught up in the general mood for change at the bottom of society, and swung over to Labour in the 1997 election.

Some now find themselves crushed. They are pushing forward demands that they hope will lift them into bigger profits. These are almost always individual “solutions”. Haulage owners have been lobbying for lower fuel prices, exemptions from the European Working Time Directive to allow them to drive longer, cuts in “red tape” and lower taxes.

Small businessmen are driven to cut corners and to put their own lives at risk, and those of their employees, in a desperate scramble to undercut competitors. These “solutions”, although sometimes coming out of a real sense of grievance, at best only tackle the symptoms of the crisis. At worst they can be directed in very right wing directions.

But when workers launch struggles that can really tackle the roots of the crisis and point to a better society, they can draw behind them elements of the petty bourgeoisie.

That means not condemning every explosion of anger from the lorry drivers or farmers as automatically reactionary as many people on the left, the TUC, and newspapers such as the Guardian have tended to.

They have branded them “Poujadist” after the 1950s French movement of shopkeepers and artisans. This was a confused movement, containing some very right wing elements, which destabilised the government and paved the way for the return to power of the right wing General de Gaulle.

ON THE other hand it would also be wrong for socialists to give petty bourgeois demands a “red” colouration and to try and adapt to them. Instead the working class has to vigorously put forward its own measures.

There are examples from the past we can learn from.

In Germany, after the workers’ revolution which ended the First World War in 1918, whole layers of the petty bourgeoisie looked to the left and the workers’ movement for solutions to the social crisis.

Ten years later the petty bourgeoisie were blaming their misery on the working class, and Hitler was able to use them as the core of his support.

As Trotsky wrote in 1933, in the absence of an advancing working class the Nazis were able to “fuse the petty bourgeoisie into oneness through its common hostility to the proletariat. Impotent before big capital, the petty bourgeoisie hopes in the future to regain its social dignity through the ruin of the workers.”

Trotsky’s analysis was tragically proved right. In the same period in France, between 1934 and 1936, workers took mass action against the threat of fascism.

The parties the working class looked to put forward an “action programme” of social and economic reconstruction to which a section of the petty bourgeoisie were attracted.

When in 1936 workers erupted in mass strikes against the economic crisis, one writer described how “the traders had hopes that business would pick up if wages were increased. Shopkeepers helped the strike committees and strikers’ families with gifts, offers of credit and big price reductions.”

Some on the left recognised that to pull sections of the petty bourgeoisie behind workers’ struggles did not mean watering down workers’ demands. Rather it meant putting forward “a bold programme which gives some promise of relief for their distress”.

Today, faced with a deep bitterness at the base of society, along with outbursts of anger by the small businessman against economic ruin, it again lies with the workers’ movement to shape the struggle.

As history shows, to do otherwise carries the risk of opening the door to right wing forces eager to exploit the crisis for their own ends. 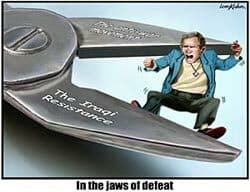 Stop The War forces police to back down over march 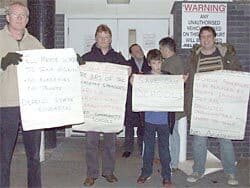