What’s a story for?

This article is over 16 years, 3 months old
Children’s literature is a vital way of engaging with our imagination, despite the way stories are taught in school, writes Michael Rosen
Downloading PDF. Please wait...
Saturday 04 March 2006

The stories written, told and filmed for children pose some interesting questions about how we see ourselves. First, what are they for?

Right from the most obviously moralistic tale through to tough, realist novels, literature and film for children have nearly always been about improvement – be good, be kind, be nice, be wise, be imaginative, be sympathetic.

Think Little Red Riding Hood – a tale that seems to shout out the message: Don’t talk to strangers, particularly if you’re young and female and the stranger is adult and male.

But where does this story come from and how come we know it? It appears first in a French collection in the 17th century and then in German at the beginning of the 19th.

The brothers Grimm were told two versions of the story by young women of the minor aristocracy. They liked to tell stories about poor rural people living at the edge of dark forests.

The Grimms, a pair of scholars from an impoverished middle class background, took up with a literary idea, that wisdom lies with the people nearest to nature – the “peasants”, or “the folk”.

However, the people who told the Grimms the tales we know so well – Cinderella, Hansel and Gretel, Rumpelstiltskin, Rapunzel, The Frog Prince, Snow White and the like – weren’t peasants or rural workers.

They were the daughters of a local pharmacist or young aristocrats. What’s more, from the time the Grimms heard the stories, up until the version we read, the Grimms made many changes.

So, the tough reality of Hansel and Gretel in which a mother suggests infanticide as a way out of poverty, is softened by making this character a stepmother. This is a concept that carries the emotional baggage of jealousy and vindictiveness as a motive.

So, what we have here is a process embedded in history. A tale born of the tough conditions of rural life is taken up as a form of middle class entertainment. It is adapted by scholars with the explicit intention of creating a new literature of the people.

Then over the centuries, these tales become part of how Western culture has engaged the imaginations of its children through millions of books, musical entertainments and films.

They’ve also entered educational programmes as “reading books” and helped give literature as a whole a set of motifs – abandoned children, wicked witches, brave men who save women.

But all this has gone on as part of how society has changed. The Grimms themselves were nationalists, Calvinists and democrats. They were self-help liberals who took an active part in trying to create a country free from domination by Napoleon and local aristocratic rule.

The tales they collected and retold were produced with that intention.

Now comes the next great tricky question – do we know that these or any other literature had the effect that the writers intend? In short, no.

So, even when we place a story in its context, we can never be sure of how it was or is received. A crucial part of this is arrived at through the means by which the story is told.

All children today receive stories through school. Everywhere this is dominated to a greater or lesser extent by selecting children for this or that school. The means by which this is done is through tests and exams.

The kinds of questions asked by these tests tends to dominate how a story is told and taught. So the questions about stories on the SATs papers in England and Wales are mostly based on chronology or logic. That is, the order in which things are told and why this or that happened.

But stories come to us on waves of feeling – tensions, expectations, dislikes, sympathies and so on. This is the basis for readers – ideas and sentiments represented by people, animals or supernatural beings.

Young people in particular will stay with a story (or not) depending on their own ebb and flow of feeling around the action and characters.

The dominant way for children to read now, laid down by government, is to treat fiction as data. It is a triumph of neo-liberalism, supported by the private companies that milk the system through their provision of test papers and the privatisation of schools.

All this helps control how books are read, no matter why they were written or what they say to us. That’s why we have a double fight – to free education both from the increasing undemocratic control and crass state intervention into how we should interpret what we read.

On 23 March at the University of Hertfordshire, I’m co-hosting a conference on some Marxist perspectives on children’s literature, dubbed, “Owners of the means of instruction?” Issues like the ones raised here, and many others, including readings from a new book on the uprisings in Kenya in the 1950s by Beverley Naidoo, will be aired.

For more information on the conference e-mail [email protected] 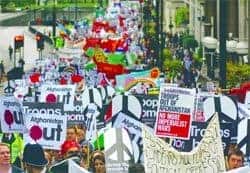 Thousands surge against the war