THE SCENES of rioting on the streets of Belfast in Northern Ireland will have shocked many people. The rioting started last week after the Loyalist terror gang the Ulster Freedom Fighters hung posters on lamp-posts and then tried to block Catholic children from attending the Holy Cross Girls’ Primary School.

Loyalists hurled a pipe bomb into the garden of a Catholic home, which threw a small girl against a fence. Many television reports treated the violence as if it was incomprehensible or stemmed from an inbred “tribal” mentality between Protestants and Catholics. Others have pointed to the recent electoral success of Ian Paisley’s anti peace agreement Democratic Unionist Party (DUP) on the one hand, and Sinn Fein on the other.

David Trimble, leader of the Ulster Unionists, has stirred up tension by his ultimatum threatening to resign this Sunday unless the IRA starts surrendering arms. He has been backed up by New Labour’s Northern Ireland secretary John Reid, who is a Unionist sympathiser. Reid even repeated his call for IRA decommissioning in the middle of the north Belfast riots.

Calls for “decommissioning” rarely mention the arms held by the Loyalist paramilitaries. Neither do they say anything about the continual presence of heavily armed British troops and the RUC police.

Trimble represents the section of Unionists who are prepared to share power with parties which represent Catholics because they want a stable climate for business in Northern Ireland. But Trimble is caught in a contradiction. He himself has a background of inciting sectarian anti-Catholic hatred. Moreover, he leads a party which is split, with at least half of its members opposed to the peace agreement.

Trimble has tried to hold on to power by whipping up opposition to the IRA over the decommissioning of arms. But this has only given credibility to the hardliners in Paisley’s DUP, which is against the agreement and wants to exclude Catholics from the political process. Paisley’s party won two extra Westminster seats in the general election. This does not mean there is any desire for a return to violence and war among the majority of Protestants.

In fact during the election the DUP had to moderate its anti peace agreement stance and insist it did not want to bring down the Northern Ireland Assembly.

Every poll continues to show that the majority of Protestants as well as Catholics want peace. The Unionist hardliners and Loyalist thugs have seen a rapid decline and fragmentation of support over the last two decades. But the bigots have been given a new lease of life because of the utter failure of the new political institutions in Northern Ireland to tackle sectarianism. Instead of bringing Protestants and Catholics together, the structures of the Northern Ireland Assembly have entrenched and hardened sectarian divisions. The whole set-up is based on the notion that only Unionist politicians can represent Protestants and only Nationalist politicians, in Sinn Fein and the SDLP, can represent Catholics.

Unionist and Nationalist politicians compete with each other for meagre resources for “their” communities. Sectarian division has become a formal part of all political life and institutions of Northern Ireland, but at the same time the assembly has done nothing to redress poverty and inequality. All the ministers in the assembly, including Sinn Fein’s Bairbre de Brun at health and Martin McGuinness at education, agree on an agenda of pushing through the privatisation of public services.

All are agreed on giving tax handouts to business and keeping a low wage economy. Meanwhile both Protestant and Catholic workers face crappy wages, declining services and miserable living conditions.

If you walk round the Ardoyne area of Belfast where the rioting broke out, there is little to distinguish Protestant and Catholic areas. Catholics and Protestants live in adjacent streets, with similar substandard housing, crumbling schools, chronic health problems, and the stress and despair created by poverty and deprivation.

Anti-Catholic bigots like Paisley, and the Loyalist terror groups of the UDA and UVF, want to direct the bitterness of Protestants against their Catholic neighbours. During the coming weeks of the Orange marching season they will whip up anti-Catholic bigotry and violence in the name of “Protestant supremacy”. But the finger of blame should be pointed not only at the Orange thugs, but at the failure of the British government and all the mainstream politicians in Northern Ireland.

For more on the peace process in Northern Ireland watch Endgame in Ireland, Sunday, 8pm, BBC2. 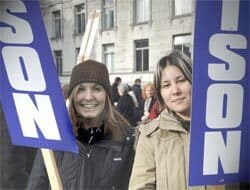 Daily Record and Sunday Mail workers step up their fight