There will most likely be a run-off between incumbent Emmanuel Macron and fascist Marine Le Pen after the first round this weekend
By Charlie Kimber
Downloading PDF. Please wait...
Thursday 07 April 2022 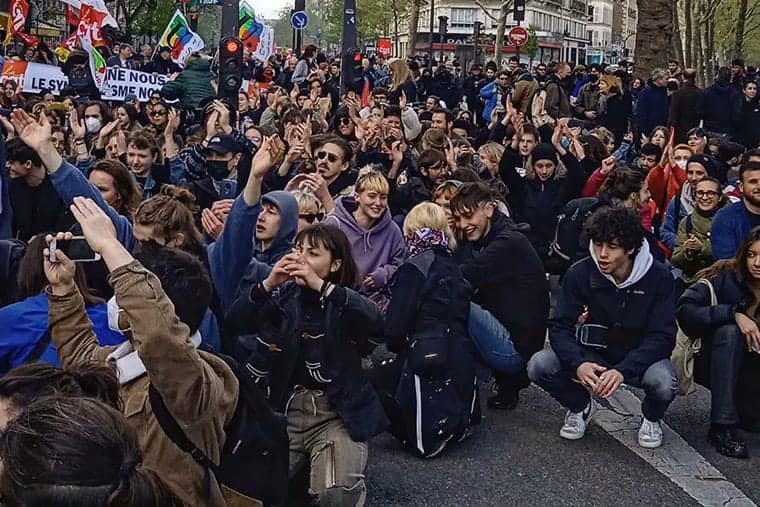 Young people take to the streets of Paris against racism ahead of the French presidential election (Picture: Louise Bihan on Twitter)

The campaign for the French presidential election on Sunday has been dominated by arguments on the right and the far right. And, barring a major upset, the winner will be committed to attacks on workers and boosting Islamophobia and warmongering.

There has been very little debate on the ruling class’s failures during Covid, nor even much on the war in Ukraine. After the first round this weekend, there will be a run-off between the top two candidates on 24 April. Incumbent president Emmanuel Macron—presently on 27 percent on the polls— will almost certainly be one of those in that contest.

He will most likely face Marine Le Pen, leader of the fascist National Rally who is polling around 22 percent. This would be a repeat of the 2017 election. But Macron’s lead over Le Pen in second-round polls is much narrower than it was five years ago. One poll this week placed it within the margin of error.

If Le Pen is elected as president, she will seek to impose even harsher laws against Muslims and migrants. She will boost the racism and impunity of the police and try to break trade union power. She could embolden street thugs who operate outside the official state structures to carry out a fascist programme “from below”.

But racism goes far deeper than the filth from Le Pen. From the beginning of the campaign almost all the leading candidates based their appeal on vile tirades against migrants and Muslims. And although he acts as if he is horrified by Le Pen’s “extremism”, Macron provides a large part of the context for such politics.

From the middle of 2020, as opposition from the Yellow Vest movement and others grew, he sharply turned towards a harsher regime of authoritarian police measures and Islamophobia. His separatism law in 2021 forced dozens of mosques to close, shut down the Collective Against Islamophobia in France organisation and disbanded several Muslim charities. This only encouraged candidates to come out with even worse racism.

Le Pen, basing her campaign in the French presidential election on the slogan “Give the French their country back”, wants to deny most healthcare and housing subsidies to immigrants. And she intends to rewrite the constitution to harden France’s borders.

She also wants to end automatic citizenship for migrants’ children who are born in France. But in recent days she has also gained from claiming to be on the side of workers facing a cost of living crisis. She says she opposes some of Macron’s assaults.

It’s a false pose—she panders to what big business wants—but it’s effective for some voters against Macron, who is widely seen as out of touch and the “king of the rich”.

The far right Eric Zemmour won mainstream coverage with his demands for “immigration zero” and a Ministry of Re-Immigration to deport a million migrants. He claimed that France faces the “great replacement”, a foul theory which says Muslim immigrants will overwhelm Europe’s white inhabitants.

Zemmour initially looked capable of passing Le Pen to become the main fascist and far right candidate. But he failed to win enough ruling class backing and his racism has gone too far for some of his supporters. He now plays the role of helping Le Pen to look less horrific.

Zemmour opposed even Ukrainian refugees coming to France. Le Pen was clever enough to say these specific refugees were welcome while maintaining her general racist rhetoric.

Conservative Valerie Pecresse has also peddled a version of the “great replacement” lie and demanded border walls and migration quotas. But she is languishing in the polls, emphasising the catastrophe facing the mainstream parties.

The main left hope in the French presidential election is Jean-Luc Melenchon of the France Unbowed party. He is on around 17 percent in the polls. He has run an effective campaign saying, for example, “You choose, retire at 60 with me or at 65 with Macron.”

Melenchon has also pledged an improved minimum wage, action on violence against women, and to leave Nato’s military command and eventually the alliance itself. He has held big rallies, including one this week where he spoke in Lille and appeared as a hologram in 11 other cities.

Two revolutionary candidates from the NPA and LO parties—both on around 1 percent in the polls— rightly point to Melenchon’s frequent concessions to French nationalism. And the lack of any real confrontation with big business. The NPA’s Philippe Poutou rightly stresses that the far right and the fascists won’t be defeated at the ballot box and the real task is to prepare for the battles to come whoever wins.

As well as the scores for individual candidates, it will be important to look at the turnout. A recent poll showed only 71 percent of those surveyed intended to cast a ballot. That would mean a rate of abstention similar to the first round in 2002—28.4 percent. This is the all-time record for the opening round. In a sign of the disenchantment, several of the major TV channels are hardly covering the elections on Sunday evening.

It is positive that anti-racists have harassed Zemmour’s rallies and some of Le Pen’s as well. And a new campaign organised demonstrations totalling thousands across France against racism and the far right last weekend.

French workers have launched powerful strikes during the last five years. Black Lives Matter saw big marches and there have been repeated movements over police brutality. Movements and struggle from below are the real hope for the future.