This article is over 13 years, 0 months old
Government plans to part-privatise Royal Mail threaten a jobs massacre and the smashing of one of the best-unionised industries in Britain. But, according to some leading CWU union activists, the leadership of their union has so far failed to deliver a strategy to resist this.
By Yuri Prasad
Downloading PDF. Please wait...
Tuesday 20 January 2009

Government plans to part-privatise Royal Mail threaten a jobs massacre and the smashing of one of the best-unionised industries in Britain. But, according to some leading CWU union activists, the leadership of their union has so far failed to deliver a strategy to resist this.

Paul Moffat, secretary of the union’s Eastern Region, told Socialist Worker, “This is the big one and we’ve got to be bold, much bolder than we’ve been so far.

“So far, the union only seems to have a political campaign that seeks to win over Labour MPs.

“The trouble is that this fight cannot be won in parliament alone. We know that no matter how many Labour MPs rebel, the Tories and the Liberals are going to vote with the government anyway.

“That’s why we desperately need an industrial campaign to go alongside the political campaign.

“We should be looking at big public rallies to defend the service and we should say we are prepared to launch nationwide industrial action as part of that campaign.

“If we don’t do this we may as well turn out the lights and go home now.”

Dave Wilshire, secretary of Bristol CWU, said, “Every decision made by our national leadership in the last six months about whether to use our industrial muscle has been wrong.

“This has been particularly true of the pensions issue, where Royal Mail has essentially got away with its attack.

“It is also true of the plans for mail centre closures and the reorganisation of delivery offices.

“There’s got to be a proper fight over these issues.”

The privatisation scheme has the potential to unite postal workers against the array of attacks they face – and help win a national ballot for industrial action.

Some branches are calling for a special conference in order to co-ordinate a fight.

Paul Turnbull, the CWU’s area processing rep for Cambridge, told Socialist Worker that his branch has given the initiative it’s backing.

“When I approached other branches in my region with the idea, they too gave the special conference their support,” he says.

If the union is to launch the kind of campaign against privatisation that can defeat the government, it is vital that as many branches as possible push for such a conference to help plan the counter attack.

Paul Moffat says that the key to winning the union to such a strategy is that activists must remain positive.

“We’ve got to be the ones who lift the mood in the offices and galvanise the members,” he said. 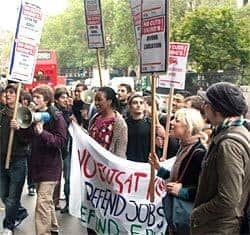