This article is over 15 years, 5 months old
More than 200 domestics, catering staff and porters at Whipps Cross hospital in Leytonstone, east London, struck on Monday and Tuesday of this week.
Downloading PDF. Please wait...
Saturday 19 August 2006

More than 200 domestics, catering staff and porters at Whipps Cross hospital in Leytonstone, east London, struck on Monday and Tuesday of this week.

The action, by members of the Unison union, was the latest in a series of strikes over pay and conditions.

The workers are demanding that their private sector employer, Rentokil Initial, honours an agreement to introduce pay and conditions equivalent to the Agenda for Change deal, which applies to staff directly employed by the NHS.

The majority of the workers have actively participated in picket lines.

Early on Tuesday of this week, there were 20 workers out at the entrance to the hospital, with more arriving through the morning.

Reg, a porter at the hospital, said, “This is the third time we’ve been out. I think it’s going to be a long, hard battle. Management are bringing in workers from other sites to do the work.”

The workers believe that staff are being brought in from elsewhere in London, and even as far afield as Blackpool.

“I went in to use the toilet yesterday and there were lots of faces I didn’t recognise,” said Vinod, another striker.

He added, “We porters are well organised and we always stick together. We’re losing money, but we want to win.”

Bob, another porter, said, “We won our equal pay deal three years ago in an earlier strike. Back then we were employed by ISS Mediclean. Later Initial took over, but they are not honouring the agreement we reached.

“It seems that every time a new employer comes in they are worse than the previous one. People really want to escalate the action – we wanted to take a week’s action this week.” 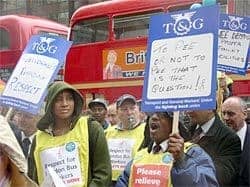