Health workers and trade unionists backed a motion of no confidence in their bosses at a meeting at in east yesterday, Thursday.

The meeting brought together the RCN, Unison and Unite unions.

Only one person voted against the motion. Workers also voted to back industrial action to defend jobs and wages, with two abstentions. Unison is preparing to hold an indicative ballot for strikes next week.

Management has targeted Charlotte Monro, longstanding Unison branch chair and health activist. She has been charged with multiple counts of gross misconduct.

Hundreds of workers face “downbanding” wage cuts. Those who agree to be moved to lower grades will keep their current pay for 18 months. This is down from three years as agreed in the national NHS conditions.

Bosses have threatened that anyone not agreeing will get their pay cut after only a year.

The hospital is part of Barts Health NHS trust, the largest trust in . It also has the largest Private Finance Initiative (PFI) scheme totaling £1.1 billion which was used to rebuild Barts and Royal London hospitals.

PFI repayments cost the trust £2 million a week and bosses plan to slash jobs and wages to help pay for it.

Workers also fear that valuable pieces of land, such as the site of the derelict nurses’ home at Whipps Cross, will be sold off to private companies. 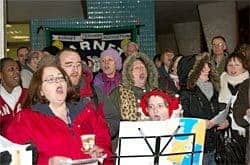 Protest to defend One Housing rep