Who makes up Britain’s ruling class?

The Economist magazine recently ran a particularly excruciating image on its front cover.

It featured Gordon Brown in a hoodie, making a gun gesture with his fingers, under the headline “Class Warrior”.

The article inside was scarcely less idiotic. It started with a turgid, rambling moan about how Brown was being beastly to posh people, before fizzling out by fantasising that “the well-heeled get angry and take against the plebs”.

In among the dross is one correct observation—that Brown’s recent rhetorical pot-shots at the ruling class are “an admission that he urgently needs to shore up Labour’s core vote”.

Much to the annoyance of the right wing press, the strategy seems to be working.

Labour seems to have stabilised its support enough for there to be talk of an early general election in March. Working class people really do respond to reminders of quite how loathsome the Tories can be.

Lurking behind all these fireworks are deeper arguments about who exactly the ruling class are, and how and why do they persist as a class.

On one level, the very existence of the ruling class is an embarrassment to capitalism.

The system justifies itself as being a kind of market meritocracy—with rewards going to the leanest, meanest and most entrepreneurial. Yet in practice, funds simply flow into the laps of those at the top of society.

This embarrassment was one reason why the Tories tried to play down their poshness back in the 1980s. The ideal hero for Margaret Thatcher was aspirational and self-made—someone who had made their money through talent and ruthlessness.

But in recent years the ruling class have become increasingly brazen about flaunting their privilege. The celebrity pages of newspapers are filled with public school brats and minor royals cavorting in Mayfair clubs. Even the worlds of fashion and pop are now dominated by the sons and daughters of the already famous.

All this testifies that decades of neoliberal policies have had an entirely predictable effect.

Slashing taxes on the rich, smashing unions, privatising public services and kowtowing to corporate power have led to widening inequality, lower class mobility, declining working class living standards—and a bonanza for a tiny minority at the top of society.

Hence the sorry sight of a decade marked by the restoration of ruling class privilege.

But things haven’t returned to how they were in Victorian times when factory owners sat as MPs in parliament.

The modern ruling class is spread out over a variety of sectors: political leaders, business managers, bankers and financiers as well as moguls and old fashioned landowners.

But behind all these lies a uniform class of wealthy people who go to the same schools, intermarry, inherit their power and live lives cut off from the vast majority.

When trouble hits, you will often find different sectors of the ruling class blaming each other for the problems.

The majority of people rightly blamed bankers for their role in the global financial collapse that triggered the current recession. But for some sections of the ruling class the focus on bankers was a convenient excuse to play down their own complicity in the crisis.

Another argument pins the blame for society’s woes on a “political class” of apparatchiks that go straight from jobs as party workers into posts as councillors or MPs with no experience of the “real world”.

Again, while there is an element of truth to this picture, it serves to downplay the extent to which this “political class” is linked to and serves wider ruling class and corporate interests.

And some right wing versions of this thesis sever these relationships entirely, leading to crazy conspiracy theories about how the “political class” is actively working against business interests by talking about global warming and plotting a world government.

All these various arguments simply serve to demonstrate Karl Marx’s description of the ruling class as a “band of warring brothers”. But Marx also noted that the brothers would close ranks when their collective class interests need to be defended.

We are in the wake of a massive global crisis for capitalism that is leading pretty much every major political party in every industrialised country to set an agenda of savage cuts and further attacks on working class living standards.

A recent Reuters “political risk” analysis quoted an economic consultant predicting that “the risk of social unrest looks higher” in coming months. “In Western Europe, the main theme this year was stimulus spending but next year it will be cuts, and that will have an effect.”

And this threat of unrest could reduce the enthusiasm governments have for these cuts packages, the consultant noted.

There lies a lesson for all of us. The ruling class is increasingly united and increasingly willing to play hardball to defend its own interests.

We need higher levels of unity on our side to assert our interests—and to make sure that we don’t end up paying for their crisis.

The anger is rising in Britain 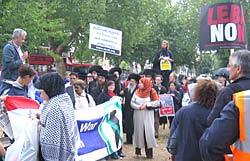 Demonstrations around Britain against Israel's continued attacks on Lebanon

Huge rise in number of children in severe poverty