Why are the Irish rowing over flags?

Why are the Irish rowing over flags?

NO SOONER was the Northern Ireland Assembly set up again last week than a massive row broke out over the flying of flags on public buildings. Unionists demanded that the Union Jack flag was flown over all government buildings last Friday on the anniversary of the Queen’s coronation. Sinn Fein said they would not fly the Union Jack unless the Irish Tricolour flag was also flown.

Why has this question taken on such importance? The TV and much of the newspaper coverage have made the row seem incomprehensible. They have presented it in the same way they often show Irish history-as if it stemmed from some sort of irrational tribal instincts inherent in Irish people. Unionists talked of the Union Jack as if it was a harmless symbol of “Protestant culture”.

Far from being harmless, the Union Jack is in fact a symbol of British colonial rule over Ireland. It represents the bloody repression that Britain used to keep down the Catholic population and any dissenting Protestants during the 300 years when it ruled the whole of Ireland.

The British ruling class deliberately fostered divisions among the Irish population on the basis of religion. It encouraged Protestants to believe they were superior to Catholics and that they should be “loyal” to the British flag. The British encouraged the creation of the Orange Order as an exclusively Protestant organisation to terrorise and stir up hatred against Catholics. Britain would later copy such brutal methods when it hoisted the Union Jack over India, Ceylon, Palestine and elsewhere across its vast empire.

When Britain partitioned Ireland in 1921 it deliberately carved out an area with a Protestant majority which would be loyal to Britain. The sectarian Northern Ireland state was run by “a Protestant parliament for a Protestant people” with Catholics as second class citizens. Today, after over three decades of Catholic resistance, Unionists like David Trimble have been forced to accept Catholic politicians in government and at least some rhetoric about equality.

But many of Trimble’s hardline supporters and the bigots in Ian Paisley’s party would love to turn the clock back. The Union Jack is the flag waved by every Catholic-hating Loyalist bigot. It is prominent on every anti-Catholic Orange march during the “marching season”. Pavements and kerbstones are painted red, white and blue in Loyalist areas.

One of the most disgusting Loyalist songs includes the lines: “I was born under the Union Jack/If guns were made for shooting, then skulls were made to crack/You’ve never seen a better Taig [derogatory word for Catholic] than with a bullet in his back.”

The Irish Tricolour carries a very different message. It is the flag that has been raised by those who have fought back against British rule. It became the symbol of the fight for a united Ireland free from British control. That does not mean socialists are uncritical of what the Tricolour represents. After all, it is the national flag of the South of Ireland, waved by the Tories and corrupt politicians there who ride roughshod over the working class.

But there is a huge distinction between the nationalism of those who want to maintain bigotry, and those who are protesting against it. The row over flags represents a fundamental problem with the whole peace process. All the new institutions in the Good Friday peace agreement are based on the assumption that there are two distinct traditions. All Catholics are presumed to be Nationalists and all Protestants are presumed to be Loyalists. Rows over the RUC police, the marching season or the assembly have all been about trying to “balance” these two cultures.

Even Sinn Fein accept the idea that there are two separate traditions which deserve equal treatment or “parity of esteem”. So, in their view, the Union Jack represents Protestant and Unionist culture and the Irish Tricolour represents Catholic and Nationalist culture.

But the real divide in Northern Ireland is not that of religion but of class. Protestant workers have gained nothing from “loyalty” to the British flag. Indeed the sectarian divisions sown by Britain’s rulers and stirred up by Unionist politicians have meant all workers in Northern Ireland suffer lower wages, worse services and greater deprivation than workers in Britain.

Sinn Fein’s two ministers, Martin McGuinness at education and Bairbre de Brun at health, may refuse to fly the Union Jack over their offices. But the question remains whether they will fight for more resources and better services for all working class people in Northern Ireland. 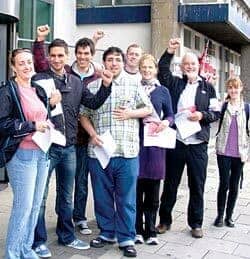